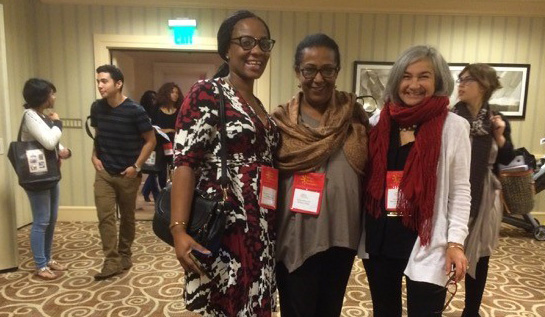 “The State and Study of Africa” was held Nov. 19-22. It is the largest gathering of Africanist scholars in the world, with an attendance of about 2,000 scholars and professionals.

“BU had a huge presence at this meeting. A former Anthropology PhD, Arianna Huhn, was chair of the Local Arrangements Committe, and (African Language Program Director ) Fallou Ngom and I have been serving on the ASA Executive Board,” said Timothy Longman, Executive Director of the African Studies Center. “We also had a huge number of people presenting papers or chairing panels, including Ngom and myself, along with faculty and staff members and visiting researchers Parker Shipton, Odile Cazenave, Michael Woldemariam, Peter Quella, Jennifer Yanco, Barbara Brown, Breeanna Elliott, Dan Connell, Jeanne Koopman, Gareth McFeely, and students Sarah Westwood, Ben Twagira, Karl Haas, and Christopher Conz.”

From the theme statement of “The State and Study of Africa:”

It is time to look at what is foreclosed in the tight embrace between the sovereign state and the university. We need a scholarship of idiosyncrasy, anachronism, and the out-of-place. We need histories that explore the paths not taken, utopias, and visions of community foreclosed by national independence. We need a political science that takes seriously the arenas of life—borderlands, informalities, refugees and migrant populations—that do not generate numbers. We need an economics that reaches outside government data sets and explores the generation of value as a subject of research. We need new ways of thinking about archives management, museology and other infrastructures of cultural preservation. We need a scholarship of development and public health that is not beholden to the encompassing demands of consultancy work. We need a humanities that re-engages the African state.

You can learn more information about the conference here.

Longman’s current research focuses on state -society relations in Africa, looking particularly at human rights, transitional justice, democratization, civil society, the politics of race and ethnicity, religion and politics, and women and politics. His new book, Christianity and Genocide in Rwanda (Cambridge University Press 2011), is based on his field research in Rwanda in 1992-1993, and 1995-1996. Learn more about him here.