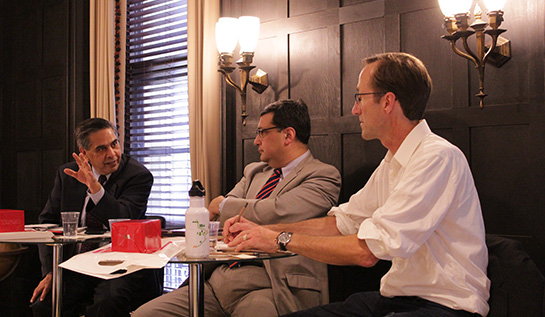 At a Nov. 5 seminar held at the Frederick S. Pardee School of Global Studies at Boston University, three insightful observers of developing countries in global climate change policy had a lively debate on what to expect, or not, from the upcoming 2015 UN Climate Change Conference in Paris, France. In a debate that was both informed and passionate, the general feeling was of gloom, but all three held on to the hope that more positive outcomes might still emerge.

The ‘Prospects for Paris’ panel was part of a two-part event series developed in conjunction with the Pardee Center for the Study of the Longer-Range Future. Focused on the role of developing countries at the upcoming conference, and featured speakers  Ali Tauqeer Sheikh (CEO of LEAD-Pakistan and Climate & Development Knowledge Network), Prof. Timmons Roberts (Professor of Environmental Studies and Sociology at Brown University), and Dean Adil Najam of the Frederick S. Pardee School of Global Studies at Boston University.

Timmons Roberts was the most optimistic of the three.

“To meet the world’s climate needs, countries in the developed world will need to be carbon neutral by 2030,” Roberts said. “This conference will be the beginning of a long road, where nations will have to prove they can make the system of voluntary pledges work. We can only get more ambitious from here on in.”

“I am not optimistic. At every climate conference since Copenhagen [2009 UN Climate Change Conference], we have ratcheted down our aspirations,” said Adil Najam, Dean of the Pardee School.  “I believe Paris is a conference condemned to succeed, simply because too many people are invested in returning with a result, but one that will make little difference in the climate.”

“Climate change has become a domestic agenda item in many developing countries. It is increasingly seen by leaders in the developing world that you cannot win the poverty battle without winning the climate change battle, and vice versa.”

Sheikh also pointed out the fact that even a two-degree increase in the global temperature – which the voluntary pledges of nations attending the Paris conference is not expected to forestall – would have disastrous consequences for many developing nations.

“Two degrees will be catastrophic for island nations like Fiji,” Sheikh said. “It will also seriously stretch the resources of nations that rely on glaciers for their water supply, as with that temperature much of the world’s glaciers will melt.”

The panel was well-attended, including by faculty. Amongst the many issues raised in the Q&A one related to the importance of adaptation issues which, according to Ali Tauter Sheikh, are already the central concern for most developing countries but which have not gained the importance they deserve on the Paris agenda.

Dean Adil Najam pointed out that we are already living in “the age of adaptation” and that now and in the future climate policy will be increasingly about water policy. He said:

“In this age of adaptation, water is to adaptation what carbon was to mitigation.”

The first event in the ‘Prospects for Paris’ series took place at the Pardee Center for the Study of the Longer-Range Future on Oct. 26. It focused on the role of the U. S., European Union, and China. Learn more about the first session here.