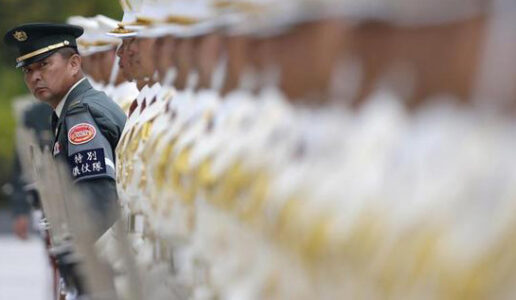 Thomas Berger, Professor of International Relations at the Frederick S. Pardee School of Global Studies at Boston University, said that Japan has a complicated perspective on its armed forces, a fact that plays into contemporary tensions about their growing military resurgence.

Berger made the argument in an Oct. 30 article in the Huffington Post entitled “Japan’s Improbable Military Resurgence.”

According to Thomas Berger, a professor of international relations at Boston University, “Japan’s best and brightest do not flock to join the armed forces, and the SDF is hardly celebrated in Japanese society.” Indeed, according to the same 2015 public opinion poll, less than half of people questioned thought that being a soldier was a respectable occupation, and only 25.4 percent perceived the job to be a challenging one.

Berger was also recently interviewed on Australian National Public Radio on the topic of Austria’s reckoning with its World War II legacy. You can listen to the entire interview here.

Also, this fall Berger helped organize a Berlin conference entitled “The Legitimacy of Military Interventions in the Context of US-German and US-Japan Relations: A comparison,” at the German Institute for International and Security Affairs. This is the second in a three workshop series on this topic; the first was held in May in Tokyo and the next one will be held in Washington, D.C. in April 2016. This series of workshops was supported with grants from the Japan Foundation Center for Global Partnership, the German Society for Research and the German Foundation for US-German Academic Exchange.

“The main purpose of these workshops is the explore the readiness and ability of the United States’ two key allies in the European and East Asian regions to contribute to international security beyond strictly territorial defense missions,” Berger said. “The overall picture that is emerging from these workshops is that the two countries are in fact making significant progress on these fronts, but both countries continue to rely heavily on broader multilateral frameworks to make their military activities palatable to domestic and international audiences and that both governments continue to face formidable domestic political obstacles to doing more. This spring we will discuss the implacations of these findings for US foreign policy.”

Berger joined the Department of International Relations in 2001. Previously, he taught for seven years at the Johns Hopkins Department of Political Science in Baltimore. Learn more about him here.