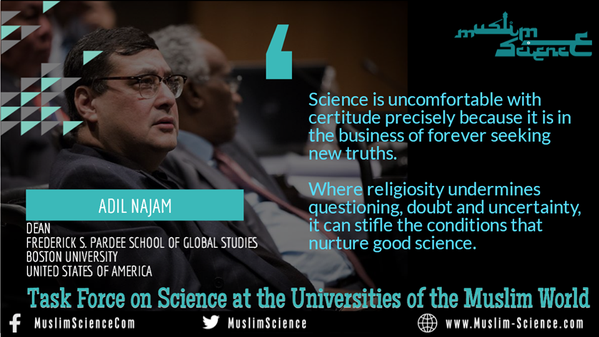 A high-level Task Force on ‘Science at Universities of Muslim World,’ chaired by Tan Sri Zakri Abdul Hamid, the Science Advisor to the Prime Minister of Malaysia, and including Prof. Adil Najam, Dean of the Frederick S. Pardee School of Global Studies at Boston University, was released today in Kuala Lumpur and called for a major revival of science education in the universities of the Muslim world. The Task Force included a dozen leading experts from around the world.

Prof. Nidhal Guessoum of the American University of Sharjah (UAE) was the Convener of the Task Force,  and Dr. Athar Osama was the director of the project. The Task Force pointed out that science education in most Muslim countries was extremely narrow in focus and did little to enable students to think critically, especially beyond their respective domains of specialty. It calls for broad liberal education for scientists and engineers to enable them to function effectively in addressing complex multi-disciplinary challenges that the world faces today. The Task Force is putting out an open call for universities across the Muslim world to join a voluntary Network of Excellence of Universities for Science (NEXUS), to be launched early next year. 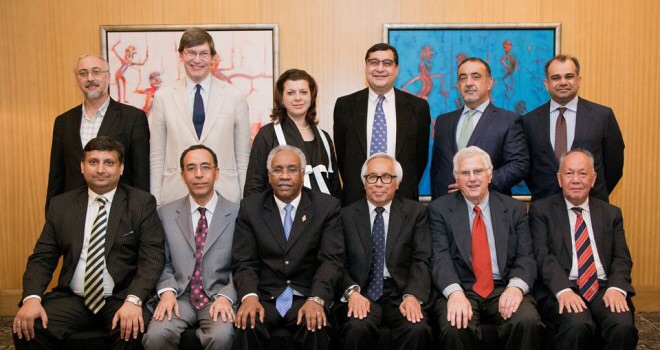 Prof. Najam’s contribution to the Task Force report was a chapter on ‘Science, Society and the University: 5 Propositions,’ and began with the assertion that “Science is not civilization. Science does not have a religion. Gravity comes from physics, not faith.” He goes on to argue that “the scientific barrenness of the Muslim World is explained not only by what is happening in our Universities, but by what is not happening in our society.”

Dean Adil Najam, who had earlier served as the Vice Chancellor of the Lahore University of Management Sciences (LUMS), in Pakistan, pointed out:

… the goal of our investments [in Universities] is not just to produce good science, it is also to produce a society that can recognize, respect and respond to good science.

… Science is uncomfortable with certitude precisely because it is in the business of forever seeking new truths. Where religiosity undermines questioning, doubt and uncertainty, it can stifle the conditions that nurture good science.

… Arguably, the Muslim world’s top scientists, best role models, and most valuable scientific minds do not live in Muslim countries… the reality is that the best ‘Muslim science’ today is happening outside of Muslim countries. It makes no sense to disown, disenfranchise, and discredit this great resource.

… a fundamental purpose of the University is to shape, and constantly reshape, society. Just as society is reflected in the University, the University has the ability to shape society. It does this through the knowledge it produces, but much more by the habits of the mind that it instills in its students. This implies a focus on how we teach science, how much science we teach, but also – and importantly – what we teach beyond science. Especially, in how the humanities and social sciences are incorporated.

In analyzing recent investments in higher education in developing countries, Dean Najam pointed out that most steps taken seem to be reasonable and sensible,

Yet, there is disenchantment with the results. The number of universities has rocketed, but their quality has slid. There are more publications, but also more plagiarism. All universities have better infrastructure, very few – if any – have better teaching. Far more people roam about with PhDs, but the scholarly discourse seems stagnant or falling. Trapped in a fetish of measuring quantity, we see quality slipping all around us. Rankings come up with weird results, junk science is put on a pedestal, ghost journals abound.

A policy agenda – no matter how well-meaning or generous – that ignores the readiness of a society to accept and embrace it, and invests no attention in creating that readiness, is doomed to stumble. Incentives will fail where there is no tradition of quality control. Performance indicators become meaningless when there is no culture of merit. Rankings become a joke if they can be easily gamed.

The lesson that the policymaker must never forget is that societal change is not something that can be assumed, it is something that has to be consciously willed, meticulously crafted, earnestly created.