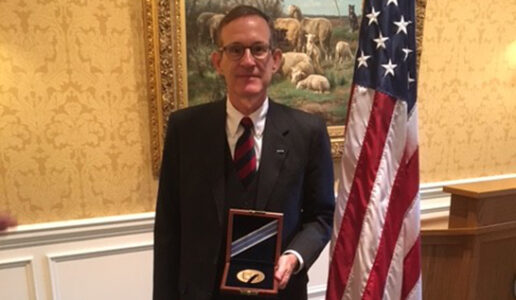 On Oct. 16, John D. Woodward Jr., Professor of the Practice of International Relations at the Frederick S. Pardee School of Global Studies at Boston University, received the Career Intelligence Medal in recognition of his exemplary service to the Central Intelligence Agency for twenty-one years.

Woodward was especially commended for his work as the first Chief of Operations for the Intelligence Community’s Counter Biological Weapons Program, where he succeeded in advancing the program’s mission impact and relevance with respect to overseas operations and community engagement.

Woodward retired from the CIA earlier this year.  During his government career, he also served as the Director of Biometrics at the Department of Defense where he spearheaded efforts to use biometric technology to identify national security threats in places like Iraq and Afghanistan.

His honor was also chronicled by Waynesburg University, of which he is a trustee.

John joined the Pardee School this past July.  This semester he is teaching intelligence related courses. Woodward served as a CIA operations officer for most of his career, with duty in several war zones. He also had management positions in the Agency’s Directorate of Science and Technology. Learn more about him here.