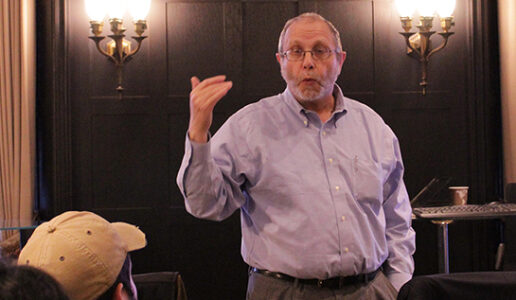 At a recent event organized by the Institute on Culture, Religion and World Affairs, the history of Religious Zionism and its impact on Israel’s journey was examined.

“Religious Zionism: Between Extremism and Dialogue” was held Oct. 15 at the Frederick S. Pardee School of Global Studies. Before a sizable crowd, the scholar Dr. Schlomo Fischer of the Hebrew University of Jerusalem outlined the roots and worldview of Religious Zionism, explaining its connection to the politics and culture of Israel throughout the nation’s history.

“Religious Zionism refers to the way some Israelis talk about themselves to other Israelis. This isn’t the New York Times’ perspective on Israel,” Fischer said. “It refers not to a kind of religious fundamentalism, but instead an intellectual approach to art, to love, to finding a pathway to God.”

Without a popular majority, Fischer said, Religious Zionism had had an outsize influence on the politics of Israel. But in recent years, the Religious Zionism community had experienced a ‘pervasive sense of crisis’ as the people of Israel became more secular and liberal.

“In this worldview, it’s a crisis that people are becoming more individualist, consumerist and committed to the peace process,” Fischer said. “Responses to this crisis range from an avant-garde revolutionary stream, to a trend that seeks dialogue and reconciliation with the Palestinian population but rejects territorial compromise.”

After his remarks, Fischer participated in a question and answer session.

Fischer is a noted sociologist of contemporary religion and a fellow of the Jewish People Policy Institute, where he directs the Annual Assessment of the Jewish People. A leading figure at the intersection of education, religion, and social class, Dr. Fischer has published extensively on religious Zionism.

The Institute on Culture, Religion and World Affairs is an affiliated regional studies center of the Pardee School of Global Studies.