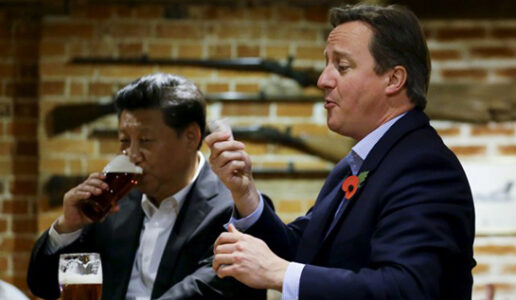 Erik Goldstein, Professor of International Relations and History at the Frederick S. Pardee School of Global Studies at Boston University, said that more and more heads of state were adopting a casual approach to some aspects of diplomatic relations.

Goldstein made his remarks in an Oct. 23 article in AsiaOne News entitled “Cameron Treats Xi to Beer, Fish and Chips in English Pub.”

Erik Goldstein, a professor of international relations at Boston University in the United States, also spoke of the transition to informal surroundings.

“It has become part of the unofficial protocol of visits by leaders of major states to have a ‘photo opportunity’ at an informal location. In this instance it is more for British domestic consumption, and is a balance to the pageantry,” he said.

Goldstein noted that the United States also seeks such opportunities in meetings with foreign leaders.

Goldstein’s research interests include diplomacy, formulation of national diplomatic strategies, the origins and resolution of armed conflict, and negotiation. Learn more about him here.