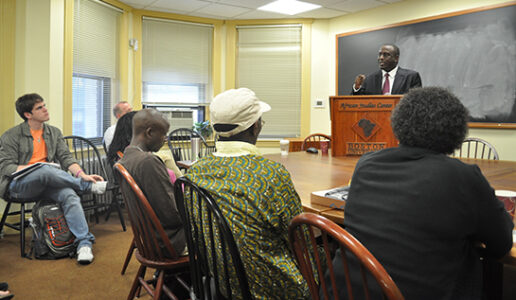 Every Monday, students, scholars, and those interested in contemporary issues in Africa can be seen toting lunches to a small room on the fifth floor of a Bay State Road academic building. They are heading to the African Studies Center, a regional studies affiliate of the Pardee School of Global Studies.

There, they will participate in the ongoing Walter Rodney Seminar Series, one of the oldest and most well-respected multidisciplinary seminar series on Africa in the world. For 38 years, academics have been sharing their perspectives in Rodney Series events, and the 2015-2016 season promises to be one of eye-opening revelations and cutting edge research.

“The Walter Rodney Seminar plays a central role in the intellectual life of our BU African studies community. Faculty and students who work on Africa at BU and in the wider Boston academic community gather weekly to hear presentations on current research in Africa being conducted in a wide range of disciplines,” said Tim Longman, Director of the African Studies Center. “The Rodney seminars are a great opportunity for BU professors and graduate students to share their own research with colleagues, and also to bring in some of the top scholars in African studies from around the world for lively discussion and debate.”

The lecture series was inaugurated in the fall of 1977, at the initiative of two doctoral candidates in Boston University’s political science department. It was named after Walter Rodney, the Guyanese scholar and political activist murdered in his native country in 1980, whose best-remembered book, “How Europe Underdeveloped Africa” (1972), has long been considered a classic in African studies.

“This cross-disciplinary dimension, which has been adhered to since the series was inaugurated, is what makes the Walter Rodney Seminars valuable and unique, as all participants have long recognized that a full understanding of Africa’s societies, prospects or problems requires a multi-disciplinary perspective,” said Edouard Bustin, Professor Emeritus of the Political Science Department and longtime organizer of the Rodney Series. “Over the past 38 years, the Walter Rodney Seminar has brought nearly 500 guest speakers to the African Studies Center.”

This season’s kickoff lecture was given by Daiva Rodimi-Taylor, Senior Academic Researcher at the Center for Finance, Law & Policy of Boston University, and Visiting Researcher at the African Studies Center. She recently co-edited a special section of AFRICA (Royal Anthropological Institute) discussing the role of local institutions of mutual security in managing the growing economic and political uncertainties in African communities.

She spoke on the topic of ‘Contested Sovereignties and Informal Authority in Post-Socialist Tanzania.’

“My talk examined novel forms of vigilantism and community policing that have accompanied the proliferation of diverse forms of lawlessness affecting Kuria borderlands of northweast Tanzania,” Rodimi-Taylor said. “The discussion explored how the emerging practices of violence and its control among Kuria reshape institutional and territorial boundaries, simultaneously reaffirming the importance of the state but also facilitating experimentation with alternative modes of regulation and sovereignty.”

The next Walter Rodney seminar is scheduled for Oct. 26, on the topic of AIDS in Nigeria.

So the next time you have a packed lunch on a Monday afternoon, consider taking a trip to Africa’s cutting edge with the Rodney seminar series.