Sewall at Pardee School: Preventing the Next ISIL 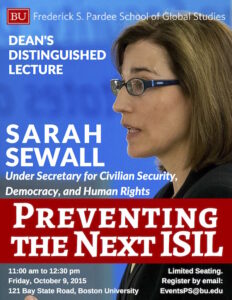 Sarah Sewall, Under Secretary of Civilian Security, Democracy and Human Rights for the U. S. Department of State, presented the Pardee School Dean’s Distinguished Lecture on Friday, October 9, 2015. She spoke before a crowd of academics and students at the Frederick S. Pardee School of Global Studies at Boston University on the topic of ‘Preventing the Next ISIL.’

Sewall’s lecture was the kickoff event in the 2015-16 Pardee School Dean’s Distinguished Lecture Series, which will bring high-level thinkers shaping the global conversations on the most pressing issues in global, regional and international affairs.

“Violent extremists attack in theaters of war and where they control territory, but they also strike in peaceful places, far from areas under their control. Boston, of course, knows this threat firsthand. I was teaching at Harvard two years ago when terrorists targeted our cherished marathon,” Sewall said. “So many other cities have shared similar horror: Madrid, Aleppo, Oslo, Nairobi, Baghdad, Timbuktu to name just a few.”

Undersecretary Sewall pointed out that there are both push and pull factors in the effort to counter violent extremism (CVE) – both the causes traditionally credited for radicalization such as propaganda and messaging, but also poverty, instability, socioeconomic marginalization and the struggle for self-identity. She explained how the strategy adopted by modern extremist groups in exploiting these grievances was forged by Al Qaeda in the years after 9/11.

“As the U.S. targeted al-Qa’ida, its remnants exploited local grievances about insecurity, unemployment, sectarianism, or marginalization — and the general upheaval of the Arab Uprising — to merge with militias, criminal networks, and insurgencies. In doing so, they created affiliates and inspired savage new groups like ISIL and Boko Haram,” Sewall said. “The rise of these groups revealed that while traditional, “hard” approaches to counterterrorism remained critical for protecting us from immediate threats, they were ill-equipped at preventing future ones from emerging. To do that, we needed a broader approach to better prevent people from turning to terror in the first place.”

Sewall discussed how the counterterrorism efforts being adopted by the U. S. are adopting a ‘whole of society’ approach – involving community stakeholders in regions threatened by violent extremism, along with extra-governmental institutions like religious groups, in addressing drivers of violent extremism from a holistic approach.

“To untangle the motives of people who align with violent groups, I’ve found it useful to think about psychologist Abraham Maslow’s famous hierarchy of needs. At the bottom are needs critical to physical survival, like food, shelter, and safety. Higher up are more abstract needs for love, belonging, and purpose. This hierarchy helps explain why individuals with such varied backgrounds have aligned with violent extremist groups,” Sewall said. “A holistic approach to countering violent extremism is only possible by empowering a broader set of actors, including civil society, business, religious leaders, women, youth, international bodies and former violent extremists. This is what we are calling a “whole of society” approach.”

Sewall was introduced by Adil Najam, Dean of the Pardee School, who also led the a discussion segment with Sewall after her remarks.

“I wonder how you negotiate the difference between local problems and a larger approach,” asked Tim Longman, Director of the African Studies Center, an affiliated regional studies center of the Pardee School. “It’s difficult to distinguish between the local issues and larger organizations feeding into regional resentments.”

In introducing his question to the Undersecretary, Ambassador Robert Loftis said: “essentially, what we’re trying to do in places with violent extremism is promote modernity, and that can cause a clash of values with entrenched interests.”

“We remain sober about the challenges ahead. Terrorists take innocent lives every day. Governments face real challenges that require the use of military, intelligence and law enforcement tools,” Sewall said. “But by emphasizing the long term security benefits of holistic policies that address push factors, including governing with accountability under the rule of law, the preventive approach has fundamentally altered the framework for evaluating and addressing violent extremism.”

As Under Secretary for Civilian Security, Democracy, and Human Rights, Sewall leads State Department efforts to prevent and counter threats to civilian security and effective governance, such as terrorism, violent extremism, mass atrocities and transnational crime. She serves concurrently as the U. S. Special Coordinator for Tibetan Issues.

Over the previous decade, Sewall has taught at the Harvard Kennedy School of Government, where she also served as Director of the Carr Center for Human Rights Policy, launched the MARO (Mass Atrocities Response Operations) Project and directed the Program on National Security and Human Rights. In 2012, she was Minerva Chair at the Naval War College.

“I expected to be brought up to speed on the State Department’s approach to extremism. Within the School, we learn so many different approaches, and I was looking forward to hearing the political viewpoint,” said Andrew VanNostrand, a second year MA candidate in the International Relations and Religion program, as well as a Pardee School Dean’s Ambassador. “I thought the most interesting thing was the focus on context. I was pleasantly surprised to hear that there was a shift from a systematized global approach to one that works closely with and works to understand local groups.”