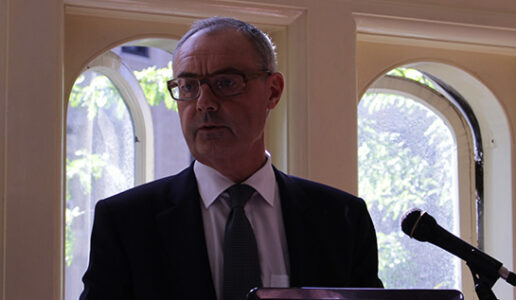 Much of the world’s attention when it comes to transnational trade agreements is currently focused on the TPP, or Trans-Pacific Partnership, which would unite the U. S., China, Japan and other Pacific Rim nations in a common free-trade environment. But on the other side of the world, another high-profile trade deal is being considered.

If passed, the Transatlantic Trade and Investment Partnership, or TTIP, would represent the largest economic relationship in the world. Connecting the U. S. and European Union in a standardized trade and investment environment, it would bring closer together two bodies that, between them, account for nearly half of the global GDP.

While many economists applaud the possibility of closer trade ties with the EU and U. S., others remain skeptical about lowering regulatory standards and compromises to health and safety made behind closed doors. For this reason, the Frederick S. Pardee School of Global Studies at Boston University sponsored “Transatlantic Trade and Investment Partnership: Moving towards Transatlantic Economic Integration,” a daylong panel series where scholars and dignitaries came together to dispel myths and talk about the potential impacts of the TTIP.

“This is exactly the kind of high-level conversations we want to foster, and we invite all our visitors to continue participating in the events the Pardee School is hosting to take advantage of the strong momentum of interest in global affairs,” said Adil Najam, Dean of the Pardee School, in his opening remarks to the assembled guests at the BU Castle. “Until recently, the word ‘global in an academic context used to be seen as flakey. Now as we examine challenges like global trade, we realize more than ever the importance of addressing our world in complex ways.”

The event’s keynote speaker was Ambassador David O’Sullivan, head of the EU Delegation to the U. S. He spoke in favor of the TTIP, both as a diplomat and from a background in economics.

“I’m a lapsed economist, and the one bit of theory I’ve always agreed with is that even if your country can make everything it needs, trade is a better creator of wealth than anything else. No country in history has gone from poverty to wealth without trade,” O’Sullivan said. “When looking at trade agreements like the TTIP, of course there will be human and social consequences, and established economic actors will be disrupted. But trying to stop trade will make people poorer.”

O’Sullivan said that, if passed, the TTIP would make the U. S. and EU the epicenter of the largest free trade nexus in the history of the world.

“We are each more heavily invested in each other than either of us is in anyone else. American companies make more money in profit from Belgium than they do from China,” O’Sullivan said. “There are a lot of benefits to be found in improving trade relations. It’s not a zero-sum game.”

O’Sullivan addressed the concerns of TTIP detractors, saying that in many cases people were attributing components to the deal that were not there.

“At the end of the day, this negotiation is a democratic process that is not taking place in a political vacuum,” O’Sullivan said. “It’s in everyone’s best interest to craft a good deal, and I am sure if they do not succeed, the member states of the EU and the U. S. won’t ratify it.”

The event was co-organized by the Pardee School, the Consulate Portugal in Boston, the Delegation of the European Union to the United States, and the Center for the Study of Europe, an affiliated regional studies center of the Pardee School.

“We are currently in an important moment for deepening transatlantic partnership,” said Vivien Schmidt, Director of the Center for the Study of Europe, who introduced O’Sullivan. “The TTIP would provide a regulatory framework for economies of scale, but detractors are common. When you look online, most people writing about the TTIP oppose it. For proponents of the TTIP, there is a lot of work ahead.”