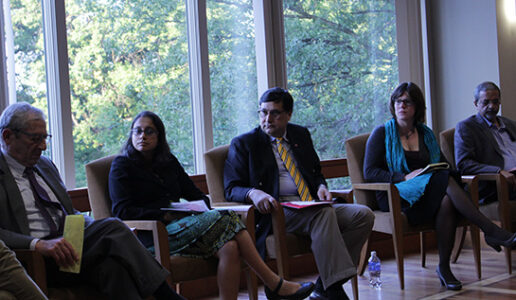 A workshop and panel of international academics organized by the Frederick S. Pardee School of Global Studies at Boston University examined the foreign policy of Indian Prime Minister Narendra Modi.

Modi, leader of the right-wing BJP Party, is the first Indian prime minister since 1984 to govern with a majority of the lower house in the Indian parliament, which has allowed him an unprecedented level of domestic support in pursuing an agenda primarily focused on economic growth. But as the U. S. looks for partners to counterbalance the growing importance of China in global policy, the foreign policy overtures in India become more important than ever – and Modi’s record, which is seen by some as Hindu nationalistic, is carefully scrutinized for clues to the future.

The daylong event kicked off with a series of closed-door workshops that brought together Pardee School professors with scholars from across the world. They included Kanti Prasad Bajpai from the University of Singapore (who attended virtually via Skype), Rohan Mukherjee of Princeton and MIT, and Amrita Narlikar of the German Institute of Global and Area Studies.

Joining them was a slate of academics who also participated in the public panel, held at 5 p.m. at the Boston University Hillel House; the Pardee School’s Manjari Chatterjee Miller, Ian Hall of Griffith University, Kate Sullivan of Oxford University, Rajesh Basrur of Nanyang Technological University, and Stephen Cohen of the Brookings Institution.

All five panelists were joined by moderator Adil Najam, Dean of the Pardee School, at the well-attended event.

“Modi has refocused his agenda on economic development, which has seen him building strategic partnerships in almost a promiscuous way,” Hall said. “There are few new aspects of Modi’s foreign policy. What’s new is the style and packaging.”

“India projects itself as a peaceful rising power, and there are a lot of benefits to the U. S.  by pursuing a diplomatic course with them,” said Sullivan. “In certain sectors, the rise of China is seen as a threat, so India is careful not to arouse any antagonism. They have a long history of peaceful intent that appeals to Western powers.”

“When Modi came to power, a lot of Americans were hoping for a Modi doctrine. There was hope in some quarters that if he turned out to be hawkish and nationalistic, he could perhaps aid in making India a counterbalance to China,” said Miller. “He has concentrated foreign policy authority in ways rarely seen before.”

“In Pakistan, Modi is seen as a hardline Hindu nationalist, and he has definitely pursued a policy that some see as tough on his neighbors,” Cohen said. “But his overriding priority has been economic growth.”

“Thanks to the majority of the lower house, Modi can govern in a sense without looking over his shoulder at issues with domestic implications,” Basrur said. “His position is much stronger, which means he can make domestic decisions without having to worry about the effect on policy regarding, for example, Bangladesh or Sri Lanka.”

The Foreign Policy in India Under Narendra Modi event was organized jointly by the University of Oxford and the Pardee School of Global Studies, with support from the Center for the Study of Asia, an affiliated regional center of the Pardee School.