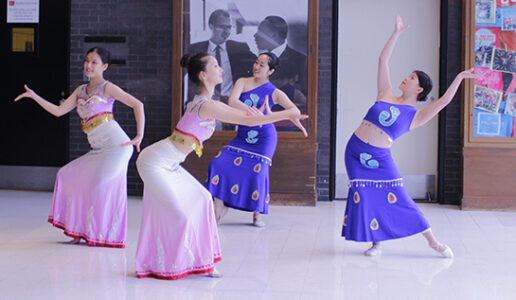 The Center for the Study of Asia, an affiliated regional center of the Frederick S. Pardee School of Global Studies at Boston University, hosted their annual Fall Reception on Oct. 5 at the George Sherman Union.

It was an evening filled with food, fun, and even dancing, courtesy of BU’s classical Chinese dance company Verge Dance. The event was organized in collaboration with the student group Asian Studies Initiative at Boston University (ASIABU), and was emceed by ASIABU executive board member Samantha Catalfamo.

“I would like to thank ASIABU for their work in putting together this event. The goal of the Center for the Study of Asia is to create a platform for conversations between faculty and students just as we see here,” said Catherine Yeh, Director of the Center for the Study of Asia. “We are probably among the most important Asia studies centers in North America. Our future goal is to strengthen ourselves even further, and better figure out how to harvest the energy of BU’s vibrant Asian studies community.”

Yeh also offered a preview of upcoming projects to the many reception attendees, including plans for a New England-Asia seminar series and future events in the current semester event theme of Asian women in positions of power.

“There are so many Asian women who have risen to top positions in government, economics, culture and the arts within the last decade,” Yeh said. ” We are examining the issue and asking the question, why now? What were the conditions that allowed so many Asian women to succeed?”

“The study of Asia is not taken seriously in many areas of academia; it doesn’t animate scholarship in political science, sociology, or economics,” Grimes said. “But you can’t understand the world without understanding Asia.”

Fewsmith agreed, and had advice for the students in attendance.

“The next time you’re in an American politics class, raise your hand and ask who built the railroads. Insist on learning about the impact of Asia,” Fewsmith said. “Bring friends to Asian events, particularly those who say they have no interest. They’re the people who most need to learn.”