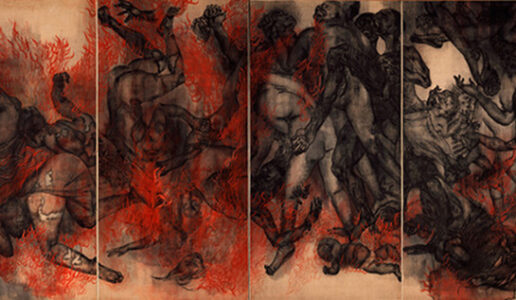 The Center for the Study of Asia, an affiliated regional center of the Frederick S. Pardee School of Global Studies at Boston University, recently participated in a University-wide series of events offering a new reckoning with the legacy of the bombings of Hiroshima and Nagasaki.

“Hiroshima and the Postwar Japanese Experience” was held Oct. 6 as a multi-part experience; part art exhibition, part film screening, and part panel discussion. The Center for the Study of Asia extensively covered the event, which brought together the expertise of professors and artists, including Pardee School Professor Thomas Berger.

From the write-up of “Hiroshima and the Postwar Japanese Experience,” published on the Center for the Study of Asia’s website:

On Tuesday evening students and faculty joined professors Thomas Berger (BU), Alice Tseng (BU), and Franziska Seraphim (Boston College) for a screening of the 1986 documentary Hellfire: Journey through Hiroshima. Detailing the artistic method and meaning behind the infamous Hiroshima Panels by husband and wife artists Iri and Toshi Maruki, the panels have become global fixtures in understanding the atrocities of war. Depicting the grotesque and mangled bodies of the victims following the dropping of the atomic bomb in Hiroshima (which the two have described as Hell), the panels have since been viewed as a graphic message advocating for permanent disarmament and world peace.

You can read the entire write-up here.

The Center for the Study of Asia recently held its annual fall Reception for faculty, students and other members of BU’s Asia community. Follow them on Facebook and Twitter.