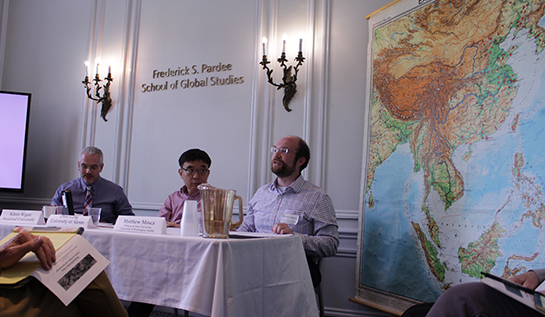 A conference held at the Pardee School of Global Studies at Boston University examined the historical antecedents of the current conflict China is negotiating in its quest for dominance of the South China Sea.

“Binding Maritime China: Control, Evasion and Interloping” was held on May 29-30. It was cosponsored by Boston University via the Center for the Study of Asia, Brandeis University, and Northeastern University.

“Maritime issues in China are a geopolitical and scholarly hot spot right now,” said Eugenio Menegon, Director of the Center for the Study of Asia. “To understand the complexities of the situation now, it’s vital to know the history of the region and how it plays into territorial claims.”

The conference filled two full days at the Pardee School, with a third day taken to visit the Peabody Essex Museum in Salem, MA, which documents the historic trade relationship between China and New England.

The conference’s keynote speaker was Leonard Blussé of Leiden University, who spoke on the topic “Oceanus Resartus; or, Is Chinese Maritime History Coming of Age?”

“Since the 1980s the Chinese economy has been completely transformed after the implementation in December 1978 of Deng Xiaoping’s policies of economic reform. It seems incredible but true that now, thirty years later, China belongs to the top-ranked players in the global marketplace,” Blussé said. “In this transformation from a predominantly agrarian society into an urbanized, industrialized one, overseas trade and shipping have come to serve as the pillars of the booming Chinese market economy.This is a break with the country’s traditional past as an inland-looking continental power: the landscape is now complemented with the seascape.”

“I’ve always been interested in this topic,” said attendee Ellen Kramer. “The speakers I heard today were extremely bright. It’s given me a lot to think about.”