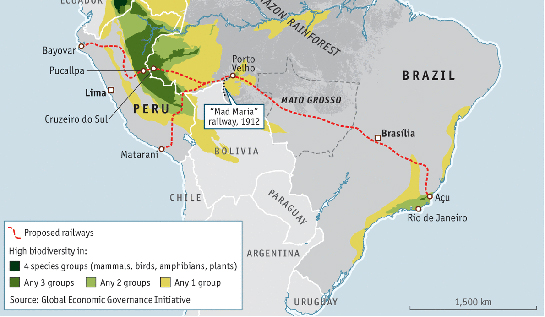 They called it ‘Mad Maria.’

The transcontinental railroad built at the turn of the 20th century from Brazil to Bolivia claimed thousands of lives and resulted in financial ruin for backers.

Now a new proposed railway, financed by the Chinese government and reaching from the Atlantic to the Pacific Oceans across South America, is drawing comparisons to the ill-fated railroad of yore. And research conducted by an affiliated center of the Frederick S. Pardee School of Global Studies is shedding light on the implications of the plan.

The China-Latin America Economic Bulletin, a publication of the Global Economic Governance Initiative (GEGI) at the Pardee School, has been cited by the Economist in its May 23 print edition in the article “The Chinese Chequebook.”

The $22 billion lent last year outstripped credits from traditional multilateral development banks, according to China-Latin America Economic Bulletin, published by Boston University. Apart from Brazil, the money has mainly gone to Venezuela, Ecuador and Argentina, where it has helped to sustain left-wing governments. Mr Li’s trip suggests a new interest in the business-minded countries of the Pacific Alliance.

Many governments in Latin America have embraced the Chinese dragon as a welcome alternative to the United States and the conditions imposed by the IMF and the World Bank. For a region with huge shortcomings in infrastructure, China’s investment, like its trade, is potentially a boon. But both have pitfalls.

The report was also cited in coverage by the South China Morning Post on May 26 in their article, “Chinese Premier Li Kequiang Returns from Latin America with a Caseful of Deals.”

China extended more than US$119 billion in loans to Latin American countries and companies from 2005 to 2014, according to a report by the Inter-American Dialogue and Boston University.

Oil-rich Venezuela has been the biggest beneficiary, with US$56.3 billion, followed by Brazil with US$22 billion.

China, which is on track to displace the United States next year as Latin America’s largest trading partner, has devoured the region’s raw materials and natural resources, exporting manufactured goods in return.

China-Latin America Economic Bulletin was coauthored by Kevin Gallagher, Associate Professor of Global Development Policy at the Pardee School and co-director of GEGI. He will travel to Buenos Aires on June 3 and 4 to deliver one of the keynote speeches at the 80th anniversary of the Argentine Central Bank. Learn more about him here.