For Hulnick and Connor, Careers of Distinction 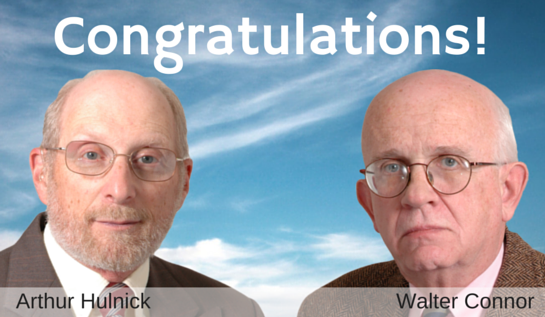 In a way, Professors Arthur Hulnick and Walter Connor come from different worlds. Hulnick spent almost 30 years as a CIA analyst, preparing briefings for Presidents and gathering intelligence in Germany and Latin America. Connor, a career academic, has made a lifelong study of the Soviet Union.

But look closer and the similarities become uncanny. Both are Princeton alums, and have dedicated their careers to a clear-eyed study of subjects prone to fearmongering and media distortion. Both have provided insight and expertise to government officials on the highest level. They live within blocks of each other in Brookline, and originally hail from around New York – Hulnick from Staten Island and Connor from Long Island. Even their wives have the same name.

And on May 16, the Frederick S. Pardee School of Global Studies at Boston University will celebrate the careers of both scholars, as they begin their retirement.

“I’m proud to have been one of the pioneers that established intelligence as a legitimate academic discipline,” Hulnick said. “To this day, Boston University has the most varied offerings in this field.”

Hulnick’s career in intelligence began in 1956 while he was still an undergrad at Princeton.

“The dean of students approached me one day and asked me if I was interested in working for the government,” Hulnick said. “I asked him, ‘can you tell me more about it?’ He said, ‘no, I can’t.’”

Hulnick elected to become an intelligence officer for the Air Force, honoring the commitment he made as a member of the ROTC. He worked for the Air Force for seven years before becoming an analyst for the CIA. His career took him across the world, from Latin America to Bonn, Germany, where he served as a liaison to the German and Canadian governments. He also served as the official briefer to the Attorney General in the Nixon administration.

In 1989, Hulnick arrived at BU as the CIA’s Officer in Residence, teaching some of the first intelligence courses at any American university. He retired from the CIA three years later and has been a faculty member ever since.

“I’ve had the opportunity to teach intelligence and to watch it from the outside. In some ways, I don’t think the profession has changed since my time. Espionage is constant; there were probably spies recruited by Joshua at the Battle of Jericho, and that still happens today. But the way intelligence is gathered, that’s changed. We do so much with cyber tools,” Hulnick said. “Collecting metadata isn’t malicious, and I do think that nobody who is a professional intelligence officer wants to harm people. Some mistakes are made, and the media capitalizes on them, but the intention isn’t to invade privacy. It’s to protect people.”

Hulnick lives in Brookline with his wife Eileen. The couple have two grown daughters, Sandra and Larisa. He plans to use his retirement to complete a book to be titled A Spy’s New York, about the history of spycraft in New York City.

“This has been such an unexpected experience. I never intended to be a professor,” Hulnick said. “But it happened, and I have been grateful for the opportunity.”

Connor moved to Massachusetts to study at the College of the Holy Cross in Worcester, and took a class during his junior year in 1961 on the Soviet Union. He completed his postgrad studies at Princeton.

“In 1961, people didn’t know a lot about the Soviet Union. No one was quite sure what to make of [Nikita] Khrushchev, who was much more mercurial in some ways than Stalin,” Connor said. “And then one year later, we had the Cuban Missile Crisis, when the world came closer to goodbye than it ever had before. It was a transformative moment.”

Connor became a renowned academic on the Soviet Union, and credits his unique political perspective as a contributing factor to that success.

“I’m used to being lonely, because I’m a registered Republican at a research university,” Connor said. “But I think the difference that gave me from a lot of academics studying the Soviet Union is that my concern wasn’t driven by the idea that the Soviet Union failed to deliver on the promise of socialism. I was just trying to figure out a country that was, at times, a real adversary for America.”

Connor came to BU in 1983, where he and his students had a front-row seat for seismic changes in the region – a trend that continues today, as Russia’s actions in Ukraine continue to unsettle foreign governments and drive news.

“A lot of times, our classes would be dissecting the week’s headlines,” Connor said. “It was an interesting time, and still is.”

Connor lives in Brookline with his wife, Eileen. The couple have two grown children, Christine and Elizabeth.

He plans to spend his retirement working on writing projects, and pledges to remain an active part of campus life.

“I’ll probably be in and out of my office indefinitely. I have too many books here to move!” said Connor.