Cross-University Symposium on Ritual and Politics in China 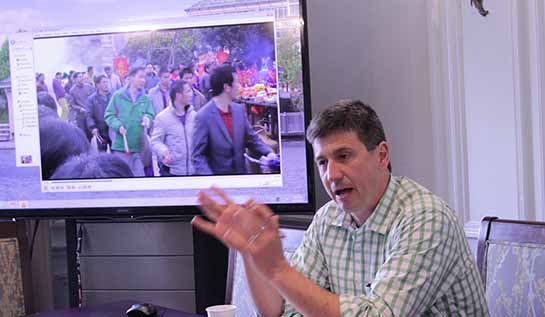 On a screen in the seminar room at the Frederick S. Pardee School of Global Studies at Boston University, video clips of a series of Chinese New Year rituals play. Chinese citizens in brightly colored red and yellow outfits parade through the streets, carrying incense and performing gymnastics. The noise from the screen is raucous and joyful.

“You should hear these celebrations in person. This is about two percent as loud as they are in real life,” said Michael Szonyi of Harvard University. Szonyi used the video clips to introduce a talk on the effect of ritual on Chinese politics, in an international symposium on ritual and politics co-hosted by the Boston Univeristy Center for the Study of Asia, an affiliated regional center of the Pardee School, and the Fairbank Center for Chinese Studies at Harvard Univeristy.

“After participating in this conference, I feel as though I am seeing new ways of looking at the intersection of ritual and governance,” said Szonyi. “This has been a very helpful day.”

The conference was entitled “Producing the Political: Religious Authority and Local Governance.” According to organizer Robert Weller of the BU Department of Anthropology, this was the first year BU and Harvard’s Fairbank Center for Chinese Studies collaborated on a conference.

“The genesis of the conference came from researchers at the National University of Singapore (Indira Arumugam and Jeremy Kingsley) who were already working on research on governance and ritual. It dovetailed well with research scholars here and at Harvard were doing,” Weller said. “The topic is an important one because it’s all too easy to think of governance as this top-down thing that’s very state centered. But what you really find is that ritual has a lot of impact on politics.”

Eugenio Menegon, director for the Center for the Study of Asia, praised the collaboration with Harvard. “The growth of Asian studies at BU means more opportunities for exchanging ideas with our colleagues across the river,” Menegon said. “For me, that’s something that really matters.”