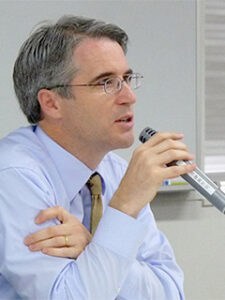 Prof. William W. Grimes has been appointed as the Associate Dean for Academic Affairs at the Boston University Frederick S. Pardee School of Gobal Studies. His responsibilities will include leading the Division of International Studies (DIS).

In announcing the appointment, Dean Adil Najam of the Pardee School said, “Bill Grimes is a effective leader who is highly regarded by all his colleagues including myself. He brings a whole set of important skills and experience to this job. I am delighted that he has agreed to take up this position and I very much look forward to working closely with him.”

Dean Najam added that this key appointment completes the governance and leadership structure of the Pardee School and that it will replace the earlier envisaged position of Director DIS.

Speaking on his appointment, Prof. Grimes commented, “I’m very excited to be able to participate in shaping the Pardee School. This is an extraordinary opportunity to define a 21st century approach to preparing our students to contribute to the world.”

Prof. Grimes is a proven academic leader, an outstanding scholar, and an expert in Japanese politics and East Asian political economy. He has been at Boston Univeristy since 1996 and is a full professor of International Relations and Political Science, he helped found the Center for the Study of Asia and served as its first Director, was Chair of the Department of International Relations, and has been the Director of Research at the BU Center for Finance, Law and Policy.

He is the author of Unmaking the Japanese Miracle: Macroeconomic Politics, 1985-2000 (Cornell University Press, 2001) and Currency and Contest in East Asia: The Great Power Politics of Financial Regionalism (Cornell University Press, 2008), as well as co-editor (with Ulrike Schaede) of Japan’s Managed Globalization: Adapting to the 21st Century (M.E. Sharpe, 2002). He has published articles, book chapters, monographs, and commentary on East Asian financial regionalism, the impacts of financial globalization in Japan, Japanese monetary policy making, US-Japan relations, and related topics.