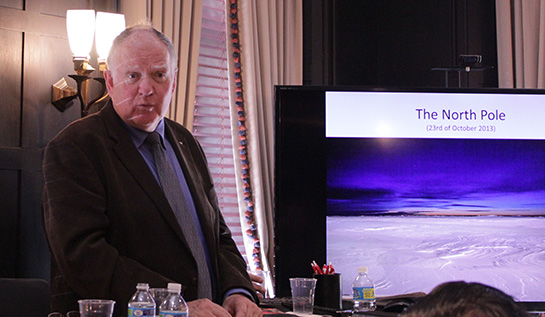 Look at a world map and pick a city. Rio de Janeiro, for example, or perhaps Canberra. In most cases, it’s easy to determine which nation ‘owns’ that city – shares in its prosperity and economic resources, protects its citizens, and provides its framework of law and order.

But there are some places on the map where such distinctions are not so simple. Take, for example, the entire Arctic Circle. Rich in natural resources, threatened with climate change, and subject to a bewildering array of treaties, bilateral agreements and competing international agendas, ownership of the Arctic is, ironically, one of the hottest issues in global politics.

Unlocking the questions posed by Arctic ownership were Michael Corgan, Associate Professor of International Relations at the Frederick S. Pardee School of Global Studies at Boston University, along with colleagues Lassi Heininen of the University of Lapland and Alan Henrikson of the Fletcher School of Law and Diplomacy at Tufts University. Together, they delivered “Who Owns the Arctic?” – a seminar conversation in the Beyond the Headlines (BtH) series at the Pardee School.

“The Arctic is big news. You almost can’t go a day without hearing a question about the Arctic making news,” said Corgan. “And with the United States about to assume control of the Arctic Council, this could be a very fraught period in Arctic politics.”

It would not be the first. As all three speakers made clear, sovereignty in the Arctic has long been a point of international contention, with serious implications for nations far away from its cold regions.

“According to the Law of the Sea, countries have sovereign rights over economic exploitation 200 miles out to sea from their borders, and that distance can be extended if the country can prove that the continental shelf extends,” said Henrikson. “But that leaves many countries disagreeing about disputed territory.”

Many issues can further complicate these disagreements, such as the presence of Arctic oil fields, the rights of indigenous Inuit peoples, and climate change – a growing problem that leads to what Heininen calls the ‘Arctic Paradox.’

The solutions to the problems bedeviling the Arctic will require a commitment to diplomacy and voluntary carbon dioxide emissions, but Corgan said that the current political climate in the U. S. made predictions in the Arctic difficult.

“Right now, President Obama probably couldn’t get the U. S. Senate to approve a resolution praising mothers and apple pie, let alone name an ambassador to the Arctic Council. If we were having this conversation in North Carolina, we couldn’t even mention climate change,” Corgan said. “It’s going to be very interesting.”