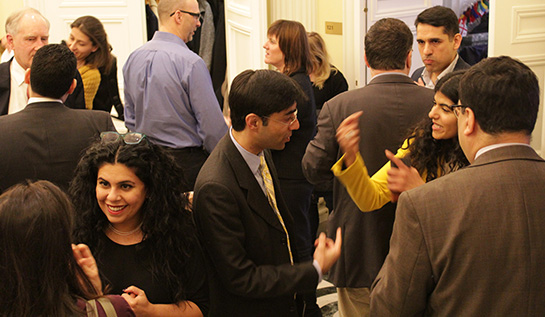 “Youth in the Contemporary Muslim World” was held at the Pardee School on April 9. The conference began with a keynote address by author Asef Bayat, musical performance, and catered reception at the Metcalf Trustees Ballroom on April 8.

“The topics discussed have been very different substantively, but one recurring theme is how young people are connecting across the globe,” said Noora Lori, Associate Professor of International Relations, who was instrumental in organizing the conference. “New, autonomous cultural spheres are linking the local and the global.”

The conference was broken up into four panels; The Art and Culture of Dissent, Muslims in the West, Education and Activism, and Youth Radicalization. Participants enjoyed catered meals and multiple discussion periods. For a full list of conference participants, click here.

“I was so impressed with the way young Arabs have analyzed their challenges with such skill,” said Bernard Rougier of Sciences-Po in Paris, France. “They were agents of change. It’s quite an impressive young generation.”

Participants in the conference said that the exchange of insights was vital to approaching issues affecting Muslim youth from multidisciplinary perspectives, and that more research and work is needed to continue understanding the challenges they face.

“This conference underscores what many of us have been saying for a long time – we must pay more attention to youth,” said Eric Davis of Rutgers University. “It’s time to start taking their aspirations and frustrations seriously.”