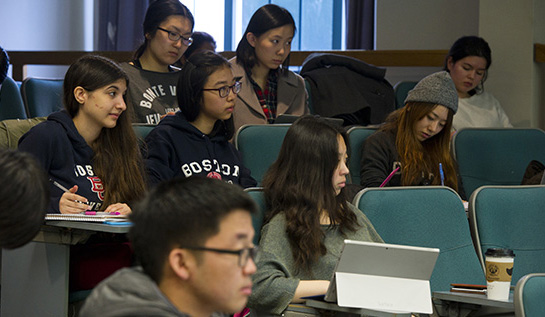 A new major focusing on the challenges and opportunities presented by a changing Asia has been profiled by BU Today.

“A Broader Look at Asia” focuses on one of the five undegraduate majors offered by the Pardee School of Global Studies – Asian Studies. Revamped and reintroduced this year from the pre-existing East Asian Studies major (the East Asian Studies minor is still offered), the new major brings scholarly resources to bear on emerging economic and cultural power players like India and Indonesia.

It is “based on the new landscape,” says Min Ye, a CAS and Frederick S. Pardee School of Global Studies assistant professor of international relations and academic coordinator of the Asian Studies Program. “Asia is a very important force in globalization.”

The interdisciplinary major offers course work on Asian cultures, economy, politics, development, languages, literature, art, history, religions, and society. It also provides an opportunity to attain proficiency in an Asian language and strongly promotes study abroad in the region. The major is designed to be flexible, allowing students to tailor it to their specific interests, whether they be a particular region or country or broader transnational issues like economic development.

CAS has had an East Asian studies major since the 1990s, primarily dealing with China and Japan, but Korea and Taiwan as well. “It was time to revise the curriculum and expand the old major into something reflecting what is happening at Boston University and also reflecting what is happening in the world,” says Eugenio Menegon, a CAS and Pardee School associate professor of history and director of the Center for the Study of Asia at the Pardee School.

Ye and Menegon are joined by other College of Arts and Sciences professors, along with Pardee School student Aldea Zhang. Read the rest of the article here.