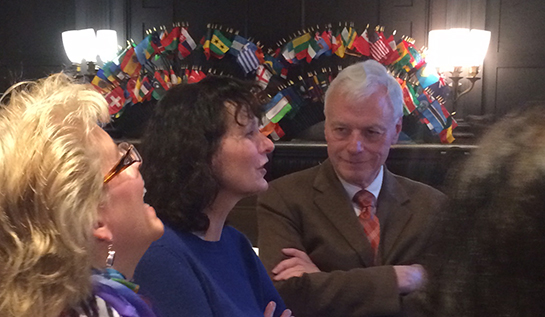 An April 1 reception held at the Frederick S. Pardee School of Global Studies at Boston University commemorated the recent affiliation of that school and the Institute for Culture, Religion, and World Affairs (CURA), one of the nation’s most august centers for the study of global religion.

“The event was a very genial reminder of the network of administrators, professors, and graduate students who have come together over the years for events at CURA, and whose presence confirmed to me how excited everyone is about the move to Pardee,” said Robert Hefner, Director of CURA. “I think this is a marriage made in heaven. Both Pardee and CURA are academic institutions that share a mission and a vision of how scholarship of how scholarship can make a difference in our global future.”

CURA began under the leadership of emeritus professor Peter Berger, and was honored by the Pew Charitable Trust in 1999 as a Global Center of Excellence for the study of religion and world affairs. They joined the Pardee School earlier this year.