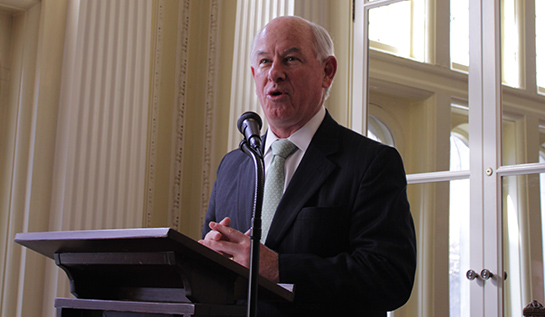 About halfway through his remarks at the BU Castle, PJ Crowley, former Deaprtment of State Spokesman and aide to Secretary of State Hillary Clinton, pulled the most dangerous weapon in the world out of his jacket pocket.

“It’s a smartphone,” he said, showing the assembled capacity crowd his ordinary Apple device. “Thanks to social media, no president, king, or dictator can afford to ignore the street. Information is disseminated more directly and widely than ever before.”

The smartphone, and the revolution in public discourse it represents, was one of the many seismic changes in world relations Crowley delineated in his March 17 talk, “America’s Public Diplomacy Crisis: Minding the Gap Between Words and Actions.” It was sponsored by the Frederick S. Pardee School of Global Studies at Boston University as part of its Inaugural Year lecture series. 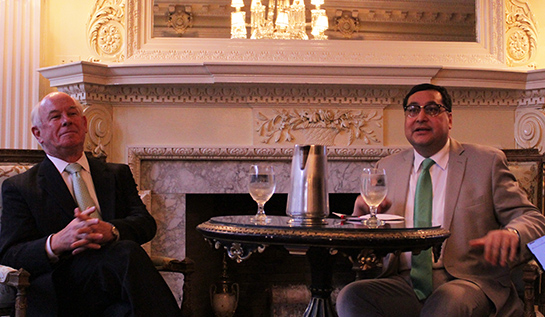 “There is a popular critique that American leadership is in decline. I don’t think that’s the case. People around the world see us as a beacon of opportunity, and we are the most networked country in the world. We exist at the center of an international system largely of our own making. As President Obama has said, when there’s a problem, the world calls Washington,” said Crowley. “But as [Pardee emeritus professor Andrew] Bacevich has said, America’s blind spot has always been recognizing the limits and unintended consequences of its power. Our new challenge is converting our power into desired outcomes.”

Philip J. (P.J.) Crowley is a Professor of Practice and Distinguished Fellow at the Institute for Public Diplomacy and Global Communication at The George Washington University, where he currently teaches courses on public diplomacy and crisis communications. A Massachusetts native, he rose to prominence in 2011 when he resigned from his position as the Assistant Secretary of State for Public Affairs after publicly criticizing the U. S. government’s treatment of Chelsea Manning, the imprisoned whistleblower behind WikiLeaks document releases.

In a wide-ranging conversation with members of the audience, as well as Pardee School Dean Adil Najam, Crowley offered insights on American projections of power in Syria, Iraq, and Pakistan, as well as barbed criticism with the state of bipartisan cooperation in American politics. 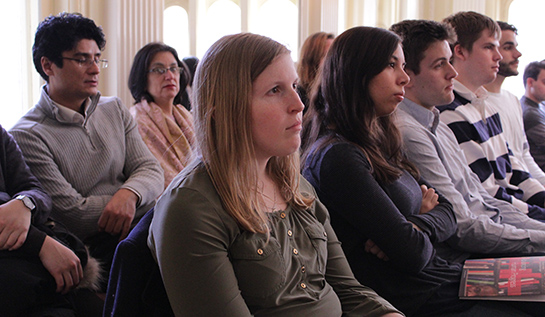 “Our current strategy with respect to the civil war in Syria is cautious and sensible, and we are a taking a patient approach with the Islamic State. However, our lack of communication on the use of drone strikes has led two out of three citizens of Pakistan to regard us as an enemy. We are doing the right thing in the wrong way, and our use of drones has to be explained better,” Crowley said. “But back at home, we are falling behind in education and infrastructure because we cannot, as a society, reach a consensus on what we want government to do on our behalf. Compromise has become a dirty word, and we are squandering our government through excessive partisanship.”

Crowley was introduced by Najam, and followed his solo discourse with a Q and A session with the audience as well as a reception.

“The world is fascinated by the U. S., and by and large they understand us much better than we understand them,” Crowley said. “Redressing that balance is central to the concept behind the Pardee School.”