Paul Webster Hare, visiting lecturer in International Relations and a former U. K. Ambassador to Cuba, has published a new book identifying the challenges of diplomacy in the 21st century – and offering solutions.

Making Diplomacy Work: Intelligent Innovation for the Modern World was published Feb. 10 by CQ Press. In it, Hare argues that the practice of diplomacy has largely failed to keep up with changes in the world like the increasing prominence of terrorist organizations and the growth of the Internet. 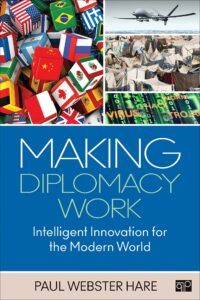 “The book grew out of my teaching of the practice of diplomacy at the Pardee School,” said Hare in an interview. “I felt the available material didn’t convey the reality of diplomacy. I tried, in writing the book, to create something both comprehensive and critical of how diplomacy is practiced.”

Hare said that many of the rituals of diplomacy date to the years after World War II, when the U. N., World Bank, and similar organizations were founded.

“There are many of these ritualistic elements – the competitiveness of different embassies, summits that are essentially photo opportunities. They detract from what diplomacy is really supposed to do, which is smooth corners,” Hare said. “Throw into the mix powerful nonstate actors like terrorist organizations, transnational NGOs, and media empires, as well as the information technology revolution, and you see a result where diplomacy has not evolved to fulfill that core function.”

However, Hare said that Making Diplomacy Work was not all criticism.

“There are other voices in the book besides my own, and what I hope in writing it is to kick off a debate. Diplomacy is a team game, and everyone needs to come together to solve problems,” Hare said. “I also outline some ideas that I think could make a positive difference for diplomacy in the future, such as a global version of the U. S. Peace Corps that would bring together bright young people from all over the world.”

Hare said that he was working with CQ Press on some possible promotional opportunities for the book, but no details had been finalized. Click here to read a sample chapter or buy a copy.

“I hope it starts a conversation,” Hare said.

Hare graduated with First Class Honors in Politics and Economics from Oxford University in 1972 and from the College of Law in London in 1976. He worked for 5 years in the private sector, in law and investment banking, before serving for 30 years in the British Diplomatic Service. Hare  served overseas in Portugal, New York, at the UK Representation at the EU in Brussels, and in Venezuela as Deputy Head of Mission. He was Head of the Foreign Office’s Non-Proliferation Department and the first Project Director for the UK’s presence at the Shanghai World Expo in 2010.