Greg Aftandilian, visiting lecturer in International Relations at the Frederick S. Pardee School of Global Studies at Boston University, has published a monograph with the Strategic Studies Institute at the U. S. Army War College.

“Assessing Egyptian Public Support for Security Crackdowns in the Sinai” was made available as a free PDF download on Feb. 10. It examines the terrorist groups in Egypt emanating from the Sinai and assesses the level of Egyptian public support for the government’s security crackdown. 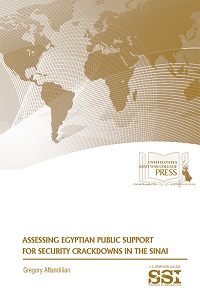 The monograph recommends enhanced U.S. counterterrorism assistance to the Egyptian military, with specialized courses for Egyptian military officers attending professional military education institutions in the United States and the training of whole Egyptian counterterrorism units either in the United States or in a friendly Arab country. The monograph also recommends the resumption of a U.S.-Egyptian strategic dialogue, to include U.S. Army officers and their Egyptian counterparts, where effective counterterrorism policies can be discussed frankly in a closed-door setting.

Aftandilian said he had a number of reasons for choosing to focus his attention on the subject.

“The terrorism problem emanating from the Sinai continues to be a major problem in Egypt and needs to be dealt with in a comprehensive manner,” Aftandilian said. “Public opinion is important in sustaining the Egyptian government’s response to terrorism, as was shown in the 1990s, and there are dangers in overreacting to this threat  – for example, punishing whole Bedouin villages in the Sinai –  by Egyptian security forces that U.S. policymakers should be aware of. I believe the United States should devote more resources in the security and economic spheres, such as providing Egyptian security forces with effective counter-terrorism training, and helping with job training for disaffected Bedouin youth, to help Egypt reduce this terrorism problem in the Sinai.”

Aftandilian, a consultant, scholar, and lecturer, is an adjunct faculty member at Boston University and American University.  He is also an associate of the Middle East Center at the University of Massachusetts-Lowell and a Senior Fellow for the Middle East at the Center for National Policy in Washington, D.C.  He spent over 21 years in government service, most recently on Capitol Hill where he was foreign policy adviser to Congressman Chris Van Hollen (2007-2008), professional staff member of the Senate Foreign Relations Committee and foreign policy adviser to Senator Paul Sarbanes (2000-2004), and foreign policy fellow to the late Senator Edward Kennedy (1999).