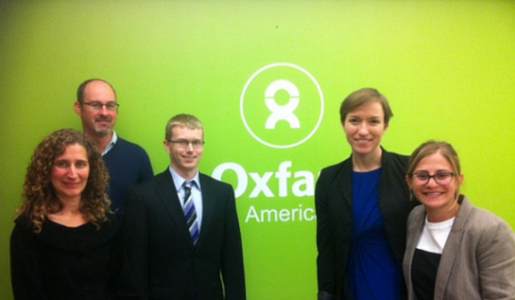 Few challenges for impoverished nations are as pressing as food security. Thanks to the Dec. 2014 Global Development Policy class at the Pardee School of Global Studies at Boston University, non-governmental organizations studying hunger in the developing world will have a new tool at their disposal.

Sarah McKeever, Sarah Sherman, and Ryan Bartlett collaborated on a new food security index, which they used to analyse data on Malawi, one of the poorest nations in the world.  In 1964, Malawi declared independence and began a program of government intervention in agricultural markets.

“In this period, there were lots of subsidies, and the government was able to create a strategic grain reserve. At this time, they were self-sufficient in the production of maize,” said McKeever in an interview. “When oil shock created an economic crisis in 1980, Malawi underwent a period of market liberalization. They sold off their strategic reserve and removed subsidies.”

Though the move generated cash, it did so at a great human cost; droughts in the decades after the 1980 crisis caused widespread famine.

“In 2000, a new government in Malawi underwent a policy shift that we refer to as the ‘hybrid regime,’” McKeever said. “The government learned from its mistakes. It did not go back to the heavy interventionism of the early period, but it reinstituted subsidies and began to rebuild the strategic reserve.”

It was within this period – roughly spanning the years between 2000 and 2010 – that the Global Development Policy team focused their research.

“What we did was come up with a food security index that combined different kinds of data in a way not done before,” McKeever said. “Specifically, we include data on trade, which is crucial as the world becomes more and more integrated, as well as governmental regime changes that can have an impact on policy.”

Anne Short, assistant professor of Earth and Environment, worked with McKeever, Sherman and Bartlett on the project. It was she who suggested bringing the research to the attention of Oxfam International, an international nonprofit working on global hunger solutions.

“We presented our research to directors of Oxfam policy research at their national headquarters in Washington, D.C. We were definitely nervous, but it was great because it gave us an opportunity to share work that aids their mission,” McKeever said. “If we can apply the index to other countries, it can be useful in helping to understand food security issues.”