Cornel Ban, Assistant Professor of International Relations at the Frederick S. Pardee School of Global Studies at Boston University, has authored a chapter in a new book analyzing the far-reaching effects of the 2008 economic crisis. 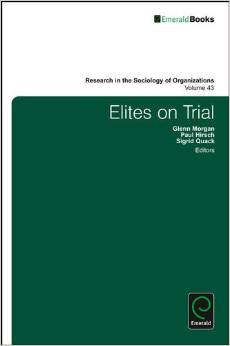 Elites On Trial, the newest volume in the Research on the Sociology of Organizations series by Emerald Books, is edited by Glenn Morgan, Sigrid Quack, and Paul Hirsch. Cornel Ban contributes the chapter entitled “From Designers to Doctrinaires: Staff Research and Fiscal Policy Change at the IMF,” to the book.

In his chapter, Ban writes:

Soon after the Lehman crisis, the International Monetary Fund (IMF) surprised its critics with a reconsideration of its research and advice on fiscal policy. The paper traces the influence that the Fund’s senior management and research elite has had on the recalibration of the IMF’s doctrine on fiscal policy. The findings suggest that overall there has been some selective incorporation of unorthodox ideas in the Fund’s fiscal doctrine, while the strong thesis that austerity has expansionary effects has been rejected.

You can read the full chapter below.

Cornel Ban is co-director of the Global Economic Governance Initiative. He is the author of several peer-reviewed articles on Brazil’s liberal neo-developmentalist political economy, sovereign debt crises and austerity in authoritarian regimes, the economic aspects of transnational migration and the diffusion of German economic ideas in Spain. He co-edited a special issue on the Washington Consensus in the BRICS (in Review of International Political Economy) and a special issue on the crisis politics and economics of the International Monetary Fund (for Governance).