The High Cost of Peace in Colombia 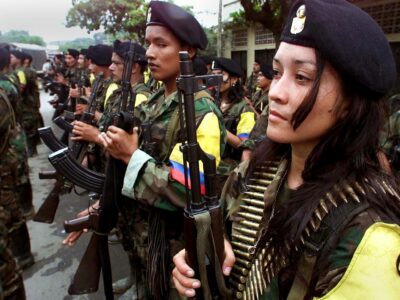 For half a century, Colombia has been riven by violence as paramilitary groups and rebel armies fight against the state government, displacing millions and contributing to appalling trends of drug trafficking and corruption. Ending this conflict finally seems in sight, but the cost of waging peace is vastly higher than the nation of Colombia may be able to afford.

To end Colombia’s violence will require the support and assistance of the international community, said Dr. Juana Garcia Duque at a recent talk hosted by the Latin American Studies Center at the Frederick S. Pardee School of Global Studies at Boston University. That talk, titled “International Cooperation and the Colombian Peace Process,” took place Dec. 8. Duque, professor of international studies at the University of Los Andes in Bogota and a former director of international cooperation for the Colombian ministry of foreign relations, spoke in Spanish, and her words were translated by BU’s Ana-Maria Reyes, associate professor of Latin American art.

“One of the biggest conflicts between the Colombian state and the guerrillas is that whenever the guerrillas have tried to be political actors, they have been largely exterminated,” Duque said. “There is no trust in the demobilization process with the state. That’s where the international community has come in.”

Many of the Colombian rebel groups, particularly the left wing Revolutionary Armed Forces of Colombia (FARC), are among the best-funded non-state military groups in the world. Kidnapping, extortion, and the drug trade has allowed them to prosecute war more or less continuously since 1964, while different Colombian leaders have tried a number of strategies to combat them.

“Under (2002-2010 Colombian President Alvaro) Uribe, the peace process underwent a radical transformation as the government adopted the language of terrorism to reduce the platform for negotiations,” Duque said. “The discourse of terrorism made it easy to cancel negotations by calling rebels terrorists rather than political actors.”

Currently, Colombia receives $500 million annually in international donations. The bulk of the funds comes from the U. S. and goes to the military to continue fighting rebels. But a number of changes in the last few years have brought new hope to Colombians.

“The government has been undergoing a two-part peace negotation with FARC in Oslo and Havana, building a five-point platform of agrarian reform, political participation, ending armed conflict, finding a solution to drug traffic, and the issue of victims,” Duque said. “But there is a still a fear in Colombia of the consequences of political participation.”

“Out of 45 transitional justice programs studied by the Harvard Kennedy School, none were in the same scale as Colombia,” Duque said. “The expectations are so enormous they are undeliverable – and now, the U. S. and other nations are trying to back away from their donor country status.”