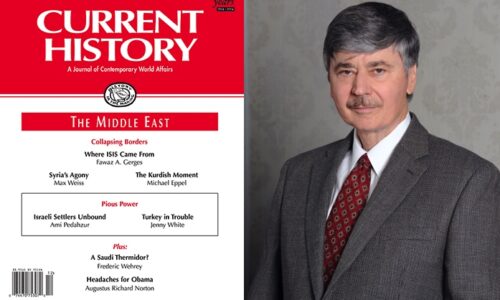 Prof. Augustus Richard Norton, professor of international relations and of anthropology at the Boston Univeristy Frederick S. Pardee School of Global Studies, has just published a new paper in the journal Current History (December 2014, Vol. 113, No. 767, pp 369-371). The paper, titled “Obama’s Middle East Headaches”, argues that “Barack Obama has tried to reduce American involvement in the region, but events keep pulling him back in. Iraq and Syria are spiraling out of control, while allies only make things worse.”

Prof. Norton begins his analysis by pointing out the state of affairs in today’s Middle East:

To describe the Middle East as in tumult would be an understatement. Four countries—Iraq, Libya, Syria, and Yemen—are in some semblance of civil war, and a discourse of violence infects much of the region. Just four years after the mass demonstrations that signaled a popular Arab political awakening, not only have economic and social conditions failed to improve, but forces of the old order are clawing back power.

And ends with this pragmatic assessment:

Yet just like every US president at least since Jimmy Carter, Obama has found that the Middle East continually demands his attention precisely because developments there impinge on key American interests. It is a good bet that the region will con- tinue to occupy large chunks of the president’s time in his last two years in office. There will be no victory parades, but plenty of headaches.