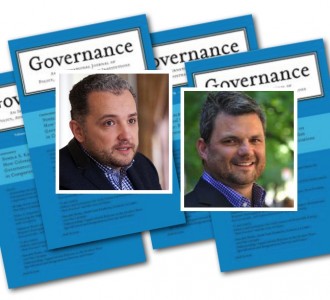 “This is no longer your grandfather’s IMF.”

He spoke with colleagues on changes to the IMF, or International Monetary Fund, in the years since the 2008 financial crisis on Nov. 20. Ban, along with associate professor of International Relations Kevin Gallagher, co-edited a forthcoming issue of Governance on the results of a study on the organization’s evolving doctrine and practice. 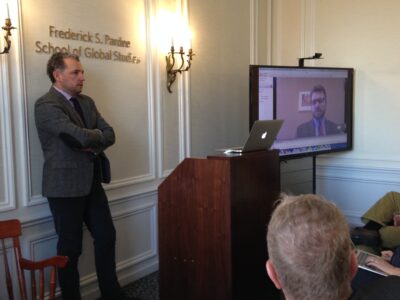 “After the crisis, the post apocalyptic landscape (at the IMF) kicked in. Our job is to map it out,” Ban said. “We found, in our study, that doctrine has been changed in some cases beyond the wildest expectations of the IMF’s most ferocious critics.”

Ban was joined by Gallagher via Skype, as well as Pardee School Professor of International Relations and Political Science Strom Thacker, who is also Associate Dean at the College of Arts and Sciences.

“The most radical change is the way the IMF has begun to think about systemic risk in international finance in regard to global banks,” Ban said. “The next biggest change is in the austerity versus stimulus debate. The IMF has actively criticized the idea that expenditure cuts will make an economy grow.”

To understand the sea change these doctrinal changes represent, you need to look at recent global history. The IMF is an organization that provides policy advice and financing to members in economic difficulties and also works with developing nations to help them achieve macroeconomic stability and reduce poverty.

To do so, it relies on the prevailing wisdom of the international economist community. And for many years, that wisdom argued against fiscal stimulus in times of economic crisis and took little account of the vast amounts of money moved across borders by global banks.

“The IMF has changed the way it thinks,” Gallagher said. “It used to be thought that the last thing you’d want to do was regulate capital flow in a recession, because it was seen as distortionary. But for many emerging markets, that meant massive capital flight as soon as there was a period of unrest. Now, regulation is seen as inherently important for growth.”

These new positions crystalized in response to the 2008 worldwide downturn, which saw many nations turning to the IMF for guidance in repairing their economies.

“(IMF managing director) Dominique Strauss-Kahn saw this as a moment to make the IMF relevant again, after many countries had come to disdain them out of disagreement for how they handled economic crises in Asia and Latin America in the 1990s,” Gallagher said.

“Change in policy was implemented unevenly, based on the politics of the institution,” Ban said. “The IMF is a complex bureaucracy, and you need agreement from the principals to move forward.”

The largest principal in the IMF is the United States, which pushed back against capital flow regulation. In the end, a compromise was reached.

“The final documents created by the IMF have policy space to regulate capital flows, but there’s a laundry list of things you’re supposed to do first,” Gallagher said. “Call it the first half step.”

The talk was sponsored by the Center for Finance, Law & Policy and the Pardee School of Global Studies and attended by around 30 audience members.