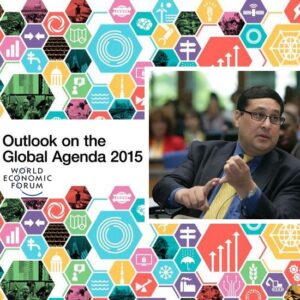 Dean Adil Najam of the Boston University Frederick S. Pardee School of Global Studies is amongst the global experts whose views are featured in Outlook on the Global Agenda 2015, the just-released new report from the World Economic Forum (WEF). The Outlook report identifies the 10 most important global challenges as identified by the WEF Global Councils. Dr. Najam’s essay introduces the seventh on this list of challenges: Increasing occurrence of severe weather events.

According to the World Economic Forum, “the Outlook on the Global Agenda 2015 features an analysis of the Top 10 trends which will preoccupy our experts for the next 12-18 months as well as the key challenges facing the world’s regions, an overview of global leadership and governance, and the emerging issues that will define our future.”

Others who contributed introductory essays to other parts of the report include: Kevin Rudd (former Prime Minister of Australia), Jose Manuel Barroso (former President of the European Commission), Kenneth Roth (Executive Director, Human Rights Watch), and many more (read the full report here).

The irony and cruelty of climate change is that the costs of extreme weather events are highest for society’s poorest. They are those least able to cope and least able to afford insurance.

The way to convince countries and companies to invest in climate resilience is the same as getting them to invest in mitigation. First of all, carry out ‘no regret’ spending: invest in policies that are good even if climate change adaptation wasn’t needed – infrastructure, for example. Second, find low-hanging fruits: inexpensive policies with high net gains, including disaster preparedness and early warning activities. Finally, look at long-term costs and benefits. Adaptation investments in sustainable and resilient technologies (such as saline agriculture) are just as good as clean energy investments. The other point to make is that disasters are unpredictable. The cost of potentially gigantic disasters is what good adaptation policy protects us against.

To sum up, the solution is to strengthen resilience before disaster strikes. That means investing in developments that work in the future, not just in the short-term. Costs can be high and speed of change can be slow, but long-term payoffs are impressive: for national economies, for business, and certainly for the poorest and most vulnerable populations who will suffer and pay if we fail to take these measures.