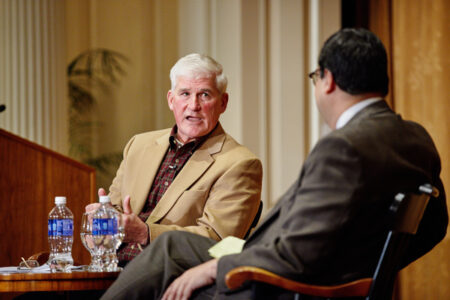 Delivering the second Pardee School Inaugural Year Lecture, Prof. Andrew Bacevich – Professor Emeritus of International Relations and History at the Frederick S. Pardee School of Global Studies – called for a deep rethink of U. S. military and international strategy and the need to find an alternative to what he termed the ‘Permanent War in the Greater Middle East.’

Prof. Bacevich argued that the US needs to think of the various conflicts it has become involved in this region not as “one mess after the other” but rather as a persistent war for the Greater Middle East. A war that is already in danger of becoming a permanent war. His view was that the U. S. is embroiled in what is, in fact, an internal war in this region – a war between the forces for and against modernity. He suggested that it is best for the US to disentangle itself from this war and leave it to those in the region itself to sort it out for themselves.

The lecture by Prof. Bacevich was followed by a conversation between him and the Dr. Adil Najam, the Dean of the Frederick S. Pardee School of Global Studies. This was followed by a broader Q&A session with the audience. More than 100 faculty and students were in attendance.

The lecture was based on research that Prof. Bacevich is conducting for a book on the same topic. He is currently leading the Pardee School’s first MOOC (massive open online course), also on the same topic, which has attracted over 10,750 students from more than 150 countries. The event was also a celebration of Prof. Bacevich’s career at Boston Univeristy, where he became Professor Emeritus in International Relations and in History, earlier this year upon retirement.

Prof. Andrew J. Bacevich is a major public intellectual who has been applauded for reaching across political lines and speaking blunt truth to power, regardless of who is in office. Prior to joining Boston University he taught at Johns Hopkins University and at West Point, where he graduated in 1969. Time calls him “one of the most provocative—as in thought-provoking—national-security writers out there today.” His new book, Breach of Trust: How Americans Failed Their Soldiers and Their Country, is a blistering critique of the gulf between America’s soldiers and the society that sends them off to war. Bacevich’s bestseller, Washington Rules, is a critique of the country’s military industrial complex.

Andrew Bacevich  holds a Ph.D. in American Diplomatic History from Princeton. With the U. S. Army, he served during the Vietnam War, and has held posts in Germany and the Persian Gulf; he retired, as a Colonel, in the early 1990s. Bacevich’s books include The New American Militarism: How Americans Are Seduced by War, and American Empire: The Realities and Consequences of U. S. Diplomacy. Bacevich has also written for The Atlantic, Foreign Affairs, and The New York Times, and is a member of the Council on Foreign Relations.

The Inaugural Year Lecture Series at the Boston University Frederick S. Pardee School of Global Studies are planned around themes and issues central to the mission and focus of Boston University’s newest School. The first lecture in the series was presented in October by Dr. Vaira Vike-Freiberga, the former President of Latvia (1999-2007), on ‘What does the future hold for Europe and the EU?’ Other lectures will follow through the 2014-15 academic year.

A video of the talk is available here.