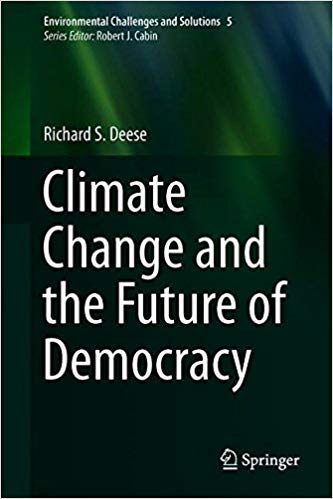 Sam Deese, a Senior Lecturer at the College of General Studies and a Faculty Research Fellow at the Frederick S. Pardee Center for the Study of the Longer-Range Future, recently authored a new book titled Climate Change and the Future of Democracy (Springer 2018).

As economic globalization has accelerated since 1945, international institutions have done a remarkable job facilitating global communication and commerce, but have been far less effective in protecting the global commons. The book analyzes how global governance could become more democratic and, consequently, more responsive to the unique challenge of climate change. By exploring past and present efforts to democratize international institutions, Deese argues that a new degree of global transparency and accountability is necessary to address the threat of climate change. Among the paths forward that he explores in the book are a political union of democracies, as advocated by the Streit Council for a Union of Democracies; a regular conference of municipal leaders, as advocated by the Global Parliament of Mayors; and an elected legislature for the UN, as advocated the Campaign for a UN Parliamentary Assembly.

In September, Deese gave a BU Rhett Talk about the book.

The ideas presented in the book are a central theme behind the October 2020 conference, “Democracy Beyond the Nation State,” that Deese and Michael Holm are planning as part of their work as Faculty Research Fellows at the Pardee Center. They plan to bring together scholars from around the world, from such diverse fields as philosophy, law, history, political science, communications, and computer science, to assess the possibility of creating supranational democratic institutions in response to new environmental and social challenges that no nation can face alone.