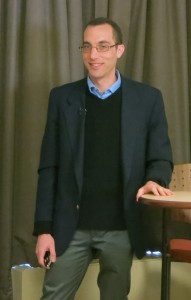 The Frederick S. Pardee Center for the Study of the Longer-Range Future hosted a talk on February 10 by Prof. Bob Kopp, Associate Director of the Rutgers Energy Institute, who is an expert on sea level rise.

Concluding that “we can’t wish or legislate sea level rise away”, Kopp explained the physics of sea level rise as a result of both thermal expansion — warmer ocean water taking up more space – and melting glaciers and ice sheets, which adds to the overall volume of water and causes mass redistribution effects and changes the earth’s gravitational fields and rotation patterns.  The latter is the primary reason that although sea level is rising on a global scale, some coastal locales will experience much more direct and intense impacts than others areas will. For example, in the U.S., coastal areas along the eastern seaboard will be subject to greater flooding risk than areas on the west coast. He cited new research the indicates by 2100, the sea level rise in New York City could be as much as 5.5 feet above current sea level, and the level of flooding that occurred with Super Storm Sandy in 2012 could be exceeded by a 10-year flood event.

He stressed that to understand and deal with the very local challenges created by sea level rise, we need to “synthesize multiple lines of knowledge” about not only the physics involved, but also climate records and patterns, ocean dynamics, land use patterns, and historic and projected flood risks. He argued that to address the issues associated with sea level rise, especially the increased flooding on the east coast of the U.S., we will need a combination of three approaches: a technocratic approach, focused on land use policies that are informed by cost-benefit analysis; an economic approach, using appropriately priced market tools such as long-term flood insurance; and a democratic approach, using deliberative community-based decision making.

Prof. Bob Kopp is Associate Director of the Rutgers Energy Institute and Assistant Professor in the Department of Earth & Planetary Sciences at Rutgers University. His scientific research focuses on employing statistical and process models to integrate diverse geological data sets, such as proxy records of past sea-level changes, with the proximal goal of improving understanding of past Earth system states  and the ultimate goals of testing and strengthening models of future global change. His policy research focuses on quantifying human impacts on the global climate and incorporating climate change impacts into benefit-cost and risk management analyses.