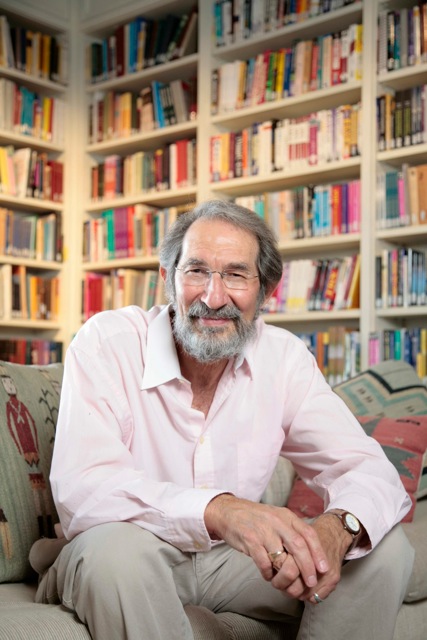 The Frederick S. Pardee Center for the Study of the Longer-Range Future is pleased to announce that theoretical physicist Geoffrey West, Distinguished Professor and former President of the Santa Fe Institute, will deliver the annual Frederick S. Pardee Distinguished Lecture on Thursday, April 4 at 5 p.m. in the Trustee Ballroom at One Silber Way. A reception will follow the lecture.

Titled “Growth, Innovation, and the Accelerating Pace of Life from Cells to Cities: Are They Sustainable?”, the lecture is free and open to the public, but advanced registration is required by March 28. (Click here to register.)  This event is associated with the Pardee Center’s initiative on The Urban Century.

Prof. West’s primary interests have been in fundamental questions in physics and biology, ranging from the elementary particles, their interactions and cosmological implications to the origins of universal scaling laws and a unifying quantitative framework of biology. His research in biology has included metabolic rate, growth, aging and death, sleep, cancer, and ecosystem dynamics.

More recently, his work has focused on developing an underlying quantitative theory for the structure and dynamics of cities, companies and long-term global sustainability, including rates of growth and innovation, the accelerating pace of life, and why companies die, yet cities survive.

Prof. West lectures around the world and has been featured in The New York Times, The Economist, The Financial Times, Wired and the Scientific American, and he has participated in television productions for Nova, the National Geographic and the BBC. His recent awards include the Mercer Prize from the Ecological Society of America, the Weldon Prize for Mathematical Biology, the Glenn Award for Aging research and Szilard Award from the American Physical Society. His work was selected as a breakthrough idea of 2007 by Harvard Business Review and, in 2006, he was selected for Time magazine’s list of “100 Most Influential People in the World”.

In addition to his affiliation with the Santa Fe Institute (SFI), Prof. West is an Associate Fellow at the Oxford Martin School, Oxford University and Visiting Professor at Imperial College London. Prior to SFI, he was leader of high energy physics at Los Alamos National Laboratory, where he remains a Senior Fellow. He previously was a member of the physics faculty at Stanford University for several years. He received his BA from Cambridge in 1961 and his PhD in physics from Stanford in 1966.