Missionary to the Cherokee Indians. 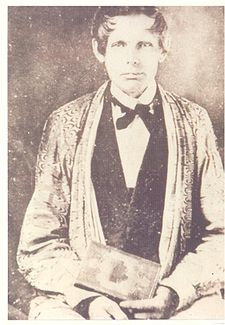 Born in Massachusetts, Worcester graduated from the University of Vermont (1819) and Andover Theological Seminary (1823). He was ordained a Congregationalist minister in 1825 and was appointed the same year to a mission station in eastern Tennessee. Since the Cherokee leader Sequoya, a native genius, had already created a syllabary, Worcester used it to translate tracts and large portions of the Bible into Cherokee. He also set up a print shop at New Echota, a principal native settlement in Georgia, and in 1827 he inaugurated the Cherokee Phoenix, the first native-language newspaper in the country. His advocacy of Christian salvation mixed with white cultural standards prompted many conversions, especially among families of mixed blood who were not averse to adopting selected aspects of Western ideas and technology. An 1830 Georgia statute prohibited whites from living among native tribes without a license, but Worcester and missionaries from several other denominations defied the law. They were arrested, mistreated, convicted, and sentenced to prison terms of several years each. Worcester alone refused to accept a pardon and took his case to the U.S. Supreme Court, which in 1843 ruled in his favor. After his release he moved to Indian Territory (later Oklahoma) in 1835 and at Park Hill Mission built houses, a church, a school, a printing office, and a book bindery. He supervised the Cherokee Bible Society and through it distributed thousands of testaments, hymnbooks, and primers. As head of the Cherokee Temperance Society, he continued to advocate habits of sober industry that had benefited the people for so long. The Indians in turn, for generations after his death, repaid his loyalty to them by retaining the faith that he embodied.

Couch, Nevad. Pages from Cherokee Indian history, as Identified with Samuel Austin Worcester, D.D., for 34 Years a Missionary of the A.B.C.F.M. among the Cherokees. A Paper Read at the Commencement of Worcester Academy at Vinita, Ind. Ter., June 18, 1884.

Worcester, Samuel Austin and Elias Boudinot. The Gospel according to Matthew: Translated into the Cherokee Language. 5th ed. 1850.

Walker, R.S. Torchlights to the Cherokees: The Brainerd Mission. 1932.