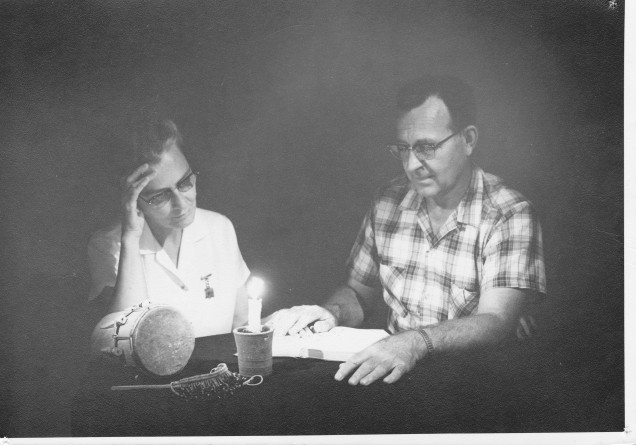 Edwin and Irene Weaver were career missionaries who served with the Mennonite Board of Missions and Charities in the United States, India and Africa. They met while students at Goshen College, Goshen, Indiana and then studied at The Biblical Seminary in New York (now New York Theological Seminary) before getting married in September 1933. Edwin and Irene served at the Mennonite Home Mission in Chicago from September 1933 to August 1935. The Board then appointed them to India, Irene’s birthplace where she had grown up as the child of missionaries. They lived and worked at Dondi, Durg, and Dhamtari, Madhya Pradesh State (now in Chhattisgarh State). The Weavers’ work was evangelistic in nature and included preaching and touring as well as the supervision of Indian evangelists and Bible women. Edwin served as bishop of the Indian Mennonite Church starting in February 1946. In December 1956 they returned to the United States with the intention of retiring from missionary work, but in 1959 the Board asked the Weavers to serve in Southeastern Nigeria. There a group of African Initiated Churches (AICs, also know as African Independent, Indigenous or Instituted Churches) had requested assistance and affiliation with the Mennonite Church. These AICs were autonomous; they developed and functioned outside the control of Western missions or churches.

The Weavers arrived in Nigeria in November 1959 where, after assessing the situation, they decided against creating an institutional mission presence in the traditional way and instead encouraged the new Mennonite Church to develop local church structures and forms. They also involved themselves in ministry with and the study of the burgeoning AIC movement in the region. Along with additional missionary personnel who subsequently joined them, they worked to repair the antagonistic relationship that had developed between the mission-planted churches and AICs, implemented a study of AICs in the region, initiated a Bible College for the training of AIC leaders, and coordinated the placement of North American Mennonite workers in existing mission-related and government healthcare, educational, and agricultural initiatives and institutions. Forced to leave Nigeria in 1967 due to the Nigerian Civil War, the Weavers toured West African countries making contacts with AICs and eventually settling in Ghana. There they continued their ministry of bridge building between mission-planted churches and AICs and training AIC leaders. The Weavers left Ghana in June 1971 at the end of their full-time missionary service but returned three times for shorter assignments in Southern and West Africa to explore and encourage Mennonite mission initiatives among AICs. The Weavers were among the first Western missionaries to engage, work with, and advocate for AICs in twentieth century Africa.

Responding to what they experienced as outdated missionary strategy and attitudes, the Weavers believed that the time was right for a new day in missions. They were present in India when it gained independence in 1947 and in Nigeria when it followed suit in 1960 and believed that Western missions should similarly relinquish power, giving national Christians control of ecclesial structures in their own countries. Having seen the difficulties that could arise when national churches did not have the resources to maintain mission-initiated institutions and not wanting to duplicate the plethora of existing efforts, they advocated for a focus on preparing people for leadership in the church instead of on developing new institutions. The Weavers believed that reinforcing the quality of AIC leadership was essential for the well being of those churches, so they sought to support and collaborate with leadership training initiatives with and for them. Theological and biblical training for AIC leaders became an important part of their missionary strategy.

In Southeastern Nigeria and later in Ghana, the Weavers found hostility between AICs and the Western missions and their churches. Mission churches often disparaged AICs and saw them as rebel sects whose leaders seceded in order to escape disciplinary measures. AIC leaders accused the mission churches of being high-handed and controlling. Weavers considered such division to be a detriment to the witness of the church and sought ways to reconcile the two sides. In Nigeria they advocated on behalf of AICs to the Eastern Nigeria Christian Council Committee that represented the major mission-established denominations in the region and organized an Inter-Church Study Group that worked for collaboration across denominational lines. In Ghana they played a similar role with the Christian Council of Ghana that represented the mainline denominations. The Weavers advocated for a collaborative missionary strategy, believing that ecumenical missionary initiatives in collaboration with indigenous Christians was better than replicating competing Western denominational structures on the continent.

The Weavers resisted the tendency to apply preconceived mission strategy and Christian theology to the contexts in which they worked, believing instead that strategy and theology should grow out of experience on the ground. They sought to allow their mission strategy to be formed in conversation with AIC partners and the situations that they encountered in the course of collaboration with them. The Weavers participated in research initiatives that studied AICs but insisted that engagement with the movement should also include ministry among its churches and relationships with local members. While highlighting the biblical example of the New Testament Church as paradigmatic for Christian faithfulness, they advocated for affirmation of African faith and theology as it was lived out in the life and practice of AICs. As they reached the end of their missionary careers, the Weavers expressed the hope that Western and African Christians could increasingly collaborate and learn from each other.

Weaver, Edwin and Irene Weaver. The Uyo Story. Elkhart: Mennonite Board of Mission, 1970.