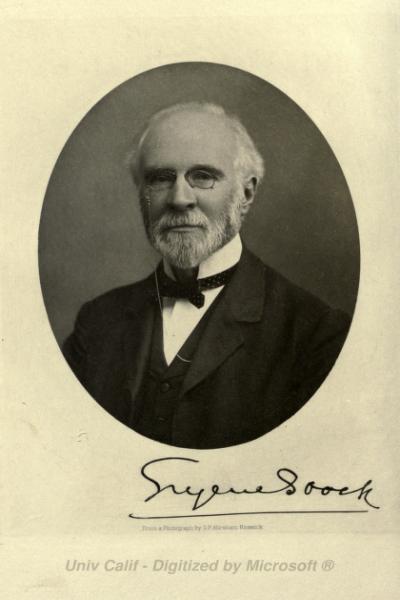 Stock gave a lifetime of service as a layman to the Church Missionary Society (CMS). He became one of the most influential figures in the evolution of CMS policies in the 20 years leading up to his retirement in 1906. Born in Westminster, London, he was a self-made man without the university or clerical background that secretaries of his eminence generally had. He joined the CMS as an editor in 1873 and soon became its editorial secretary with responsibility for its publications, in particular for the prestigious and influential journal The Intelligencer. Throughout the 1880s his influence grew, partly because his vast and unrivaled knowledge of missionary history gave him power in respect of issues where a historical perspective was often crucial. He also had a capacity to write quickly, clearly, and in a way that lent weight to his own views as a policy framer. He had a certain irreverence for traditions and became an advocate of the “new,” whether it was Keswick spirituality, the need to have women missionaries, or the ever more liberal stance of the Student Christian Movement. He also had an instant appeal with “young Turks” and was particularly on the wavelength of the rising (often radical) missionary interest in the university world.

Stock’s outstanding achievement was his four-volume History of the Church Missionary Society (1899-1916). It is without doubt the best piece of missionary history writing of the nineteenth century, and also provides some of the most incisive insights into nineteenth-century Anglican evangelicalism. Nonetheless it is a flawed work, as Stock allowed his own immediate strategic objectives to skew his presentation of the past. By the 1890s he had become convinced that the society needed to move away from its Venn-inspired commitment to indigenous ministry and leadership to a much more pan-Anglican and consequently white-dominated vision. Thus the society’s clear commitment in 1877 to overlapping, independent episcopates for different racial groups is glossed over; the resurgence of a very powerful backlash in favor of Venn’s views in the relevant 1899 Centenary Review Committee is largely ignored, and little prominence is given to the non-European contribution to missionary work. He was the major architect in the society’s move in 1901 to a “one church,” territorial episcopate model with the inevitable likelihood, which Stock accepted, of European dominance for the foreseeable future. He was also much involved in the wider missionary scene with the Society for the Propagation of the Gospel and the Anglican Board of Missions both at a provincial and at a national level. He remained in close contact with the day-to-day affairs of the CMS during most of his long retirement (1906-1928).

Stock, Eugene. Beginnings in India. London: Central Board of Missions and SPCK, 1917.