Founder of the Christian and Missionary Alliance 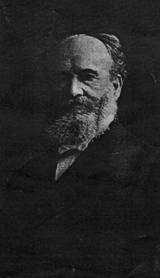 Raised as a strict Scottish Presbyterian on Prince Edward Island, Canada, Simpson was attracted as a teenager to Puritan devotional writings. In 1865 he was ordained and then served prestigious churches in Hamilton, Ontario, and Louisville, Kentucky. In 1847 he incorporated holiness ideas into his Reformed faith and was filled with the Holy Spirit, a turning point in his ministry. In 1881 he was rebaptized by immersion and experienced faith-healing of heart trouble. Resigning from the Thirteenth Street Presbyterian Church in New York City, he founded the Gospel Tabernacle, from which he launched various mission and healing activities, including rescue missions, an orphanage, healing homes, and outreach to immigrants.

Simpson believed that Jesus’ return was dependent on the gospel being preached to all the world. Fulfilling the Great Commission thus became the focus of his vocation and he felt a missionary call to China. Unable to go because of family opposition, he threw himself into “home base” activities for world mission. In 1880 he published the first illustrated mission magazine in North America, The Gospel in All Lands. He opened the New York Missionary Training College (later Nyack College), which sought to give lay people a foundation in the Scriptures and to get them quickly onto the mission field.

At his first annual summer convention in Old Orchard, Maine, in 1887, Simpson founded the Christian Alliance and the Evangelical Missionary Alliance. The Christian Alliance spread missionary fervor at the home base, while the Evangelical Missionary Alliance acted as a foreign mission board. An interdenominational mission movement, the alliances merged a decade later and became the Christian and Missionary Alliance. By 1895, the C&MA had sent out nearly 300 missionaries. Simpson led the organization until his death. His wife, Margaret, served as financial secretary and as secretary of missionary appointment and equipment. Simpson wrote hundreds of books and articles and edited The Word, the Work, and the World, a weekly publication. He recruited people into the movement by holding summer mission conventions, by preaching on missions, and by educating people at his Missionary Training Institute. After Pentecostalism emerged in the early twentieth century, the C&MA lost many supporters and missionaries because Simpson refused to say that speaking in tongues was necessary for salvation. Under his leadership, the C&MA was nevertheless the most important of the early American pre-millennial “faith missions.”

Simpson. A. B. The Christ of the Forty Days. New York: Christian Alliance Publishing Co., 1890.

_____. Hymns and Songs of the Four-fold Gospel, and the Fullness of Jesus. New York: Christian Alliance, 1891.

_____. The Holy Spirit, or, Power from on High: An Unfolding of the Doctrine of the Holy Spirit in the Old and New Testaments. Part I. The Old Testament. Harrisburg, PA: Christian Publications, 1895.

Hartzfeld, David F. and Charles Nienkrichen, eds. The Birth of a Vision: Essays on the Ministry and Thought of Albert B. Simpson. Camp Hill, PA: Christian Publications, 1986.

Nienkirchen, Charles W. A. B. Simpson and the Pentecostal Movement: A Study in Continuity, Crisis, and Change. Eugene, OR: Wipf & Stock Publishers, 2010.

“Albert Benjamin Simpson: An Integrated Spirituality with Christ as the Centre,” by Rev. David John Smith.

Biography, gospel songs, and photographs of A. B. Simpson.