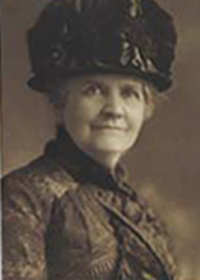 Lucy McGill was born in Belmont, Kansas, the daughter of John and Sarah McGill. She received a secondary education in Rochester, New York, and attended classes at the University of Rochester. In 1881, she married Norman Waterbury, and that year the couple accepted an appointment with the American Baptist Missionary Union to work with the Telugus in Madras, India. After five years in India, Norman died and Lucy returned to the United States to accept a position as home secretary for the Woman’s Baptist Foreign Mission Society of the East. She supervised literature production and recruitment of new missionary candidates. In 1906 she left the employ of the society to wed Henry W. Peabody, who died two years later, leaving her with a considerable estate. She returned to mission work and became involved with ecumenical women’s organizations, notably the Central Committee on the United Study of Foreign Missions. Peabody made the acquaintance of Helen Barrett Montgomery in the 1890s and the two collaborated on writing projects and world travel in the promotion of missions. In 1913 and 1914 the two women traveled around the world, also serving as delegates to the 1913 meeting of the Edinburgh Continuation Committee in The Hague. One result of that tour was the establishment of the World Day of Prayer, for the women of the world. Following World War I, Peabody identified with the moderate wing of the Northern Baptist Convention fundamentalists. When a personnel disagreement between the American Baptist Foreign Mission Society and her son-in-law, Raphael C. Thomas, occurred in the 1920s, Peabody led in the formation of an independent Baptist mission agency, the Association of Baptists for Evangelism in the Orient (later, Association of Baptists for World Evangelism–ABWE). Reacting to management policies of the American Baptist board, she protested by walking out of the annual conventional sessions in 1927. Her presidency of ABWE ended over differing theological views and opposition by ABWE missionaries to female leadership. In 1923, Peabody became a promoter, with founder Marguerite Doane, of the houses of Fellowship in Ventnor, New Jersey, later the Overseas Ministries Study Center.

Lucy Peabody photograph at the website of the Association of Baptists for World Evangelism.