Samuel Newell graduated from Harvard College (1807) and from Andover Theological Seminary (1810), where he was active in a society of Christian students seeking to undertake a mission to the heathen. In 1810 he and others proposed to the orthodox Congregational clergy in Massachusetts that they be sent as missionaries. In response, the American Board of Foreign Commissioners for Foreign Missions (ABCFM) was formed. Newell studied medicine while awaiting passage to India. Just before embarkation from Salem, Massachusetts, in February 1812, he married Harriet Atwood, who had joined the Congregational church in 1809 and had developed an interest in missions through Samuel’s courtship.

When they reached Calcutta in June 1812, they and their fellow missionaries Adoniram and Ann Judson, Gordon Hall, and Samuel and Rosanna Nott, were ordered to leave by the British East India Company. The Newells took ship for Mauritius, but on a long and stormy voyage Harriet gave birth to a child who died and was buried at sea. Harriet died soon after landing, barely 19 years of age and the first American to give her life in foreign missionary service. A memoir prepared by her husband was mailed home and widely read, and it became a powerful missionary tract.

Samuel Newell sailed to Ceylon, where he spent a year preaching and investigating mission opportunities. Learning that Hall and Nott had succeeded in establishing residence in Bombay, he joined them in 1814, inaugurating the first American mission station overseas. With Hall, Newell published an elaborate and widely circulated plan for the evangelization of the world. After several years’ activity in the mission’s program of schools, evangelism, and publishing, Newell visited cholera victims at Tannah. He succumbed suddenly to the disease in 1821.

First American missionary martyr, subject of the first memoir of a missionary wife 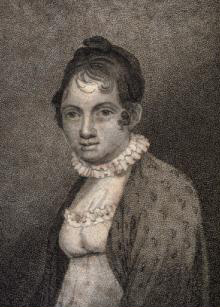 Born in Haverill, Massachusetts, Harriet married Samuel Newell in 1812 and became one of the first missionary wives sent by the American Board of Commissioners for Foreign Missions (ABCFM). Samuel, after graduating from Harvard College (1807) and Andover Theological Seminary (1810), had been instrumental in the formation of the ABCMF. His enthusiasm for mission was echoed in the devout Harriet, who had joined the Congregational church in 1809, and the two were sent to India with Adoniram and Ann Judson on February 19, 1812. Harriet was pleased to be sailing with Ann, as the two had developed a friendship at Bradford Academy, despite Ann being five years her senior. After a journey of 112 days, the ship landed in Calcutta and the missionary party was met by William Carey on June 18, 1812. However, they were soon expelled from India by the British East India Company, which thought missionaries would adversely affect trade. Hearing that the British governor of the Isle of France did allow missionaries, the Newells took the next ship to the Isle. Because of severe storms and a leak in the ship, the six-week journey ended up taking three months. Pregnant Harriet contracted dysentery and prematurely gave birth to her daughter. After five days, the baby was dead. When the ship landed, Harriet, herself, died of consumption on November 30, 1812, at the age of nineteen. Wanting to commemorate Harriet’s dedication to mission and hoping that it would inspire the conversion of some of her friends, Samuel Newell wrote her memoir and sent it to America to be published. He also requested that Dr. Leonard Woods, a professor of Christian theology at Andover and a member of the ABCFM, give the sermon at Harriet’s memorial service. The memoir and sermon were published in 1814 and the book quickly became a best-seller, with numerous editions to follow. Harriet became the first American missionary martyr and her memoir, the first memoir of a missionary wife to be published in America or Britain. Children were named after her. Women and men, alike, were inspired to pursue missionary service because of her example of self-sacrifice.

Newell, Harriet. Memoirs of Mrs. Harriet Newell, wife of the Rev. S. Newell, American Missionary to India, who Died at the Isle of France, Nov. 30, 1812, Aged Nineteen Years. Edinburgh: Printed by and for Ogle, Allardice, & Thomson, 1817.

Newell, Harriet and Leonard Woods. A Sermon Preached at Haverhill, Mass., in Remembrance of Mrs. Harriet Newell, Wife of the Rev. Samuel Newell, Missionary to India who Died at the Isle of France, Nov. 30, 1812, aged 19 Years; to which are added Memoirs of her Life. Boston: Printed by Samuel T. Armstrong, 1814.

Newell, Samuel and Gordon Hall. The Conversion of the World, or the Claims of the Six Hundred Millions, and the Ability and Duty of the Churches. 1818.

“Portraits of American Women in Religion” includes a portrait and sketch of Harriet Newell.

“Mrs. Harriet Newell.” In Newell, Harriet. Memoirs of Mrs. Harriet Newell, wife of the Rev. S. Newell, American Missionary to India, who Died at the Isle of France, Nov. 30, 1812, Aged Nineteen Years. Edinburgh: Printed by and for Ogle, Allardice, & Thomson, 1817.