Leader of the Swedish and international student movements 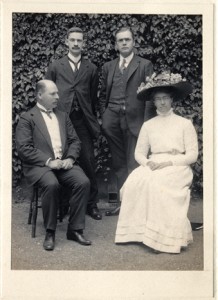 Fries was born in Stockholm into an upper middle-class family with maritime connections. In school and at Uppsala University he developed a warm evangelical faith. He initially intended to become a missionary to Ethiopia, but his health did not permit it. In the 1880s he became deeply involved in the work of the YMCA, organizing a world conference in Stockholm in 1888, with appointment as a full-time paid YMCA secretary. In the following year, Fries visited the United States and met John R. Mott for the first time. Unable to attend Moody‘s Northfield Conference in 1890, he sent Nathan Söderblom in his place, thus launching Söderblom’s ecumenical career. In 1895, Fries was one of the founders of the World Student Christian Federation, at a conference in Vadstena, Sweden, which he organized almost single-handedly. Thereafter, the record of Fries’s career was one of tireless travelling, organizing, and conference-going. In 1912 he was elected the first chair of the newly created Swedish Missionary Council, a position he held for eight years. In 1920 he became general secretary of the YMCA, based in Geneva, holding the post during the difficult postwar years. Fries’ personal faith was warmly evangelical, with strong Keswick-style “holiness” leanings; he was an accomplished linguist, and his social connections with Swedish royalty and aristocracy made him uniquely influential at home and opened many doors internationally.

The records of the World Student Christian Federation, 1875-1945 (inclusive), and the papers of John R. Mott, 1813-1978 (inclusive), are both at Yale University’s Sterling Memorial Library in New Haven, Connecticut, USA.

See the brief biographical sketch, “Karl Fries (1861-1943),” in Appendix B, “Key Figures,” in Kenneth Steuer, Pursuit of “An Unparalleled Opportunity”: The American YMCA and Prisoner of War Diplomacy among the Central Power Nations during World War I, 1914-1923. Includes three photographs of Fries, including one of Fries with John R. Mott. [Gutenberg-e is a program of the American Historical Association and Columbia University Press.]