Learning from Conflicts over Marriage and Civil Rights Law

*We hope the reschedule this event at a later date, please stay tuned for more information*

This symposium celebrates the publication of Who’s the Bigot?: Learning from Conflicts over Marriage and Civil Rights Law  authored by Linda McClain. 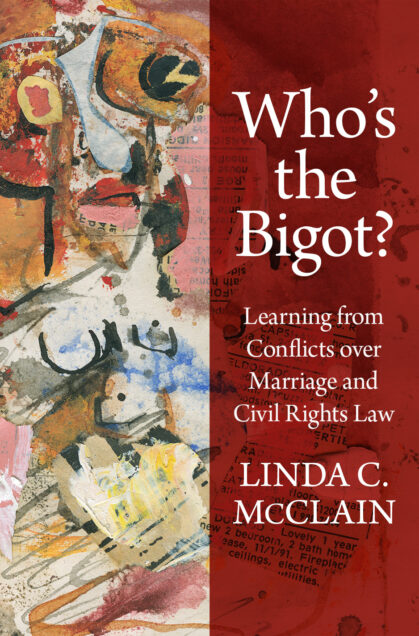 McClain has been a Laurence S. Rockefeller Visiting Faculty Fellow at Princeton University Center for Human Values and a faculty fellow at Harvard University’s Edmond J. Safra Center for Ethics. A past chair of the Family and Juvenile Law Section of the Association of American Law Schools, she currently serves on the Executive Committee of that Section and the Section on Women in Legal Education and is a member of the American Law Institute. At the School of Law, McClain has organized interdisciplinary conferences and symposia, including an upcoming conference on the 100th anniversary of the Nineteenth Amendment, establishing the right of women to vote. As an affiliated faculty in the Women’s, Gender, & Sexuality Studies (WGS) Program, she coordinates the law school’s participation in the WGS Certificate Program for JD students. McClain is also faculty advisor to the Women’s Law Association. In addition to teaching at BU School of Law, McClain also teaches in the Kilachand Honors College at Boston University.