By the time Maria was referred to the Immigrants’ Rights & Human Trafficking Program at BU Law, she had already been reunited with her two children. They had been separated for 48 days. For most of that time, Maria—an assumed name chosen to protect her identity—had no idea of where her children were being held and no idea of how to contact them.

After the family presented themselves at the southern US border to seek asylum, Maria was charged and plead guilty to improper entry, a misdemeanor that according to Sarah Sherman-Stokes, associate director of the Immigrant’s Rights & Human Trafficking Program (IRHTP), was rarely pursued before former Attorney General Jeff Sessions announced a “zero-tolerance policy” regarding border crossings. As a result of that guilty plea, Maria got “time served,” spending just one day in prison. Even with such a short sentence, the Department of Homeland Security (DHS) removed her children, and without her knowledge, sent them to a detention center in Chicago. The story is one of many that came to light and public outcry in the summer of 2018—just after Maria and her family fled Brazil in fear of their lives.

Violence against women is particularly common in Latin America, where cultural mores assert male dominance and women vulnerable to domestic abuse have few, if any, resources to escape it. Maria and her children—the younger of whom struggles with autism and other emotional and cognitive challenges—are survivors of significant and escalating family violence. Remaining in their home country was not an option.

“There’s a lot of misinformation about why people are coming to the US,” says Sherman-Stokes. “This family, like many others, didn’t have a choice. They left their country in order to save their lives.”

Briana Cardwell, Luis Guerrero, and Maggie Loeffelholz (all ’20) spent the better part of their 2L year as student attorneys working in the IRHTP to secure asylum for the family. Cardwell and Guerrero took responsibility for Maria’s asylum application. They conducted client interviews, researched country conditions in Brazil, spoke with psychiatrists who could speak to the trauma the family endured, and drafted briefs and affidavits that corroborated her claims and built a strong case.

Meanwhile, Loeffelholz pursued individual asylum claims and Special Immigrant Juvenile Status applications for the children. She also worked with the older daughter to prepare her to testify as a witness at her mother’s hearing. “Immigration court is a scary place, especially when you have to tell the most awful details of your life,” Loeffelholz says. “We built a rapport over the course of the year, but it was really hard, because you have to retell your story over and over again to learn to present the parts of your story that are relevant to asylum law. It’s an emotionally challenging time.”

Guerrero agrees. Maria was his first client, the first person with whom he had to build a relationship that would empower her to tell her story in front of an immigration judge and DHS attorney. “She was very forthcoming from the beginning,” he says. “She had endured a lot of trauma, but her ability to express herself so early in our relationship was inspiring. One of the things our team discussed a lot was that if she had the strength to keep pushing and the resilience to keep going then we had to find some way for her to stay.”

While they were preparing her case, the student attorneys worked with a School of Social Work student to help the family access healthcare and education services to meet the needs of their daily lives. “There were a lot of moving parts,” Cardwell says, “because working with a family required more than just legal research. We were engaging with them beyond the case, because these were whole people and not just a legal problem.”

Some factors in Maria’s case were far outside the team’s control. The Trump administration’s continued restrictions on the rights of asylum seekers—like Matter of A-B–, a ruling that attempted to eliminate domestic violence and other forms of “private criminal activity” as bases for asylum claims—forced the students to think creatively about how to argue their client’s genuine and credible claim for asylum and fear of return to her home country.

After months of work on the application and corroborating evidence, many hours preparing Maria and her family, and many classes spent mooting trial skills, the hearing was scheduled. Guerrero conducted the direct examination of Maria while Cardwell conducted the direct examination of the expert witnesses. Loeffelholz helped keep them organized and took notes while her teammates stood before a judge for the first time.

“It was nerve-wracking at first,” Cardwell says, “but I got past it when I realized that this wasn’t about me, but about our client and her children. I had to push past my nerves. In the end, it was a great learning experience and will help me be more confident in the future.”

“The whole experience was amazing,” Guerrero says. “When we got the case, I was nervous, especially knowing the trauma our client had experienced and realizing that this is someone’s life in the balance. But the clinic did a great job in preparing us.” 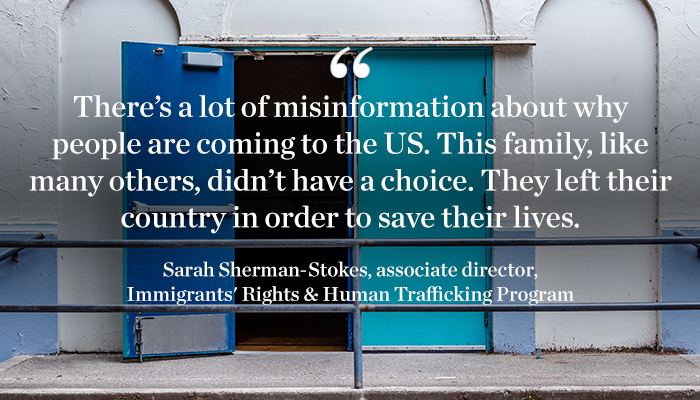 Immigration merits hearings typically last three or four hours, after which the judge makes their decision. After a lengthy cross-examination that kept Maria on the stand for nearly two hours, the hearing closed for the day and a second was scheduled for later in the spring. The delay meant more stress for the family and the students, but when the second hearing closed the judge announced that he had granted Maria’s application for asylum. Since her children are minors, they would be covered by her application and granted asylum along with her.

“I was so nervous as the judge was reading his decision,” Cardwell says. “I wanted it so badly for them, because they deserve it and this was the first good thing that happened to put them on a path for a better life in the US. It was really great. It was the happiest moment I think I’ll ever have in my life.”

“The students did an incredible job,” Sherman-Stokes says. “They all did really diligent work to prepare, and then Luis and Briana were also so good on their feet, which is a hard skill to learn. I was so proud of them.”

Maria’s story, and her interactions with the IRHTP, did not end when she was granted asylum. The family continues to wrestle with the trauma and persecution they fled in their home country and the daily challenges of navigating a new city. The IRHTP will continue to help them through the immigration process by helping with their green card applications and, when there are eligible, referring them to Project Citizenship (run by alum Veronica Serrato) to complete the last steps toward citizenship.

After their experience with Maria and her family, Cardwell, Guerrero, and Loeffelholz all say they want to continue working in immigration law, and particularly with asylum seekers, when they graduate. For Cardwell, the case clarified the need for organizations and services that support asylum seekers. “There are so many people with stories like hers,” she says. “It takes courage to come here—it’s such a risk, and such a hard system to navigate. We’re asking people who are fleeing for their safety to advocate for themselves in a court system that is confusing. There need to be more people out there speaking on their behalf.”