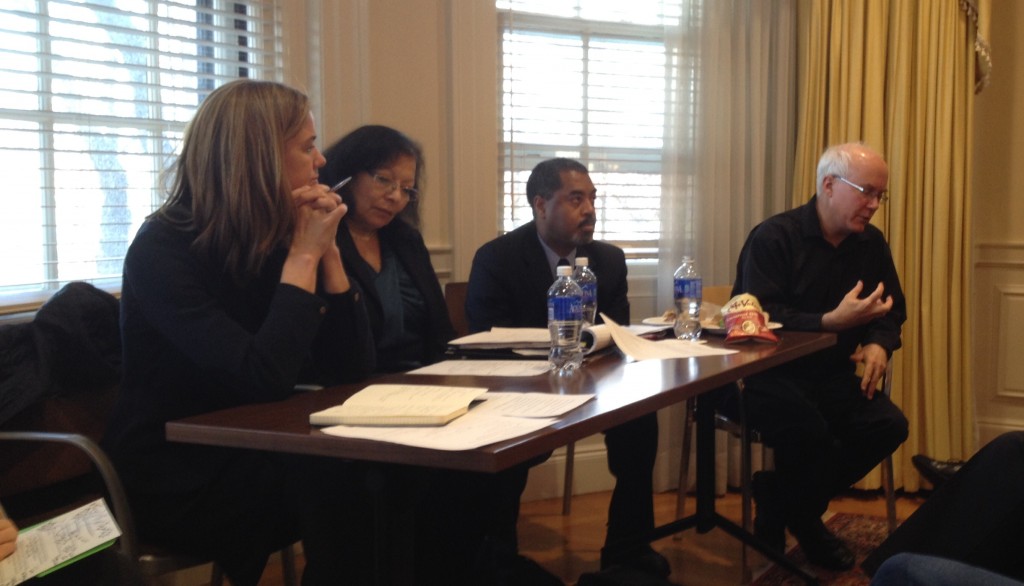 On Thursday December 4, Boston University students, faculty, and area practitioners gathered for The Inclusive City, the third edition of the Initiative on Cities’ Urban Seminar Series. Coming on the heels of widespread public unrest over the Eric Garner case in New York City and the Michael Brown case in Ferguson, Missouri, the Seminar’s focus on social, economic, and psychological inclusion echoed a national call for equity.

“The issue of inclusiveness is being hotly debated on the streets of cities around the country. The timing couldn’t have been better for this panel,” said Nathan Phillips, Professor of Earth & Environment at Boston University (BU) and co-chair of the Urban Seminar Series. Introduced by Phillips, the panel featured four experts on inclusion: Phillipe Copeland, Clinical Assistant Professor at BU’s School of Social Work; Robert Margo, Professor of Economics at BU; Carmen Torres, Clinical Instructor at BU’s School of Education; and Katie Swenson, Vice President of National Design Initiative on Enterprise Community Partners. The discussion was moderated by Japonica Brown-Saracino, Associate Professor of Sociology at BU.

What Does It Mean to Be an Inclusive City?

Each of the panelists had a unique perspective on the meaning of inclusivity, ranging from inclusive housing systems to educational and economic opportunity.

Swenson noted that inclusivity can be fostered by the physical make up of a space – for her, form and function are inherently linked. A city’s housing supply can be a key foundation for inclusivity. Across the country, 19 million people are housing insecure, while hundreds of thousands are homeless, according to Swenson. The majority of those populations are in urban areas. Creating affordable and accessible housing for these populations is a critical step in ensuring inclusive cities.

Professor Torres highlighted the critical role that education, particularly early education, plays in promoting inclusivity and closing the opportunity gap.  Black males, for example, start falling behind their peers as early as 3rd grade. That gap persists into adulthood, contributing to segregation and unequal opportunities. Professor Margo was most interested in the economic side of inclusivity. As a historian, he viewed the issue with a long lens, citing the race riots of the 1960s as having a lasting impact on the economic opportunities facing African-Americans today.

Copeland identified mass incarceration as the most significant roadblock to inclusion, noting that while millions of Americans are currently in prison, almost all of them will return to society at some point. How are they welcomed back into the community? How do cities ensure that, after paying for their previous actions, former convicts are reintegrated into society? This problem is accentuated by racial disparities in incarceration. According to Copeland, 33% of Black males will be incarcerated at some point in their lives, a rate that is massively skewed compared to other demographic groups.

All four panelists agreed that while tolerance is often seen as a desirable outcome, it is not the same as inclusivity. An inclusive city must provide the same opportunities and services to all residents. Upward mobility for all people is a necessity. After establishing a nuanced definition of urban inclusivity, the panelists focused on the primary obstacles to inclusion.

Rising income inequality was quickly identified as the most pressing threat to inclusion. The earnings gap, which translates into a major difference in opportunity for high- and low-income populations, can be traced back several decades. The “white flight” phenomenon of the mid- to late-twentieth century certainly played a role. Margo explained that higher-earners during this time period, mostly whites, abandoned the city for the suburbs. These suburban neighborhoods largely excluded Blacks and other minorities through zoning regulations, redlining, and other methods that precluded lower income and minority populations from entering certain neighborhoods and suburban districts. Homeowners living outside of the city were able to create more wealth as they purchased houses and land – as that wealth passed to subsequent generations, economic disparities were further entrenched.

Swenson noted that wealthier families have also had the luxury of shopping for housing, choosing where they live based on the quality of local schools, the proximity to shops and grocery stores, and the safety of nearby neighborhoods. Folks with fewer resources are simply unable to make housing choices based on these important factors, and are thus often left to settle in more isolated areas with fewer amenities.

In recent years, the migration back into cities has had a divisive effect. As urban neighborhoods develop, housing prices rise, driving out low-income residents. Torres suggested that this process of gentrification has only increased segregation and reduced inclusivity in cities.

Meanwhile, low-income children, especially minorities, are practically born into an educational disadvantage. Torres notes that in Boston, for example, where 78% of public school students are Black and Latino, 33% of Black and Latino boys will drop out before graduating high school. Low-income families have fewer educational resources for their children outside of the classroom, and according to Torres, by the 6th Grade, low-income students are approximately 6,000 hours of out-of-school enrichment behind their middle- and high-income peers.

According to Copeland, widespread disparities in the justice system reinforce these patterns of exclusion. With 3 million people currently incarcerated and 7 million on parole, the amount of people directly and indirectly impacted is staggering.

Margo added that convictions have a significant negative impact on future earnings, meaning that a past incarceration can take a lifelong economic toll.

Psychological obstacles to inclusion and the ability to have a voice were considered equally important to promoting inclusivity in cities. Copeland suggested that certain perceptions around police forces can often prove detrimental to unified communities, with the recent events in Ferguson, MO and Staten Island, NY serving as illustrative examples.

What can be done?

All four panelists agreed that it is critical for local and national governments to invest in children early in order to break the cycle of exclusion.

The panel also argued for the value in giving people a voice and a sense of ownership, with Swenson citing urban neighborhoods like San Ysidro in San Diego, California, as powerful examples of regular people creating a culture of inclusivity by forming a powerful voice. The San Ysidro community rallied together to prevent a growing call for border control that threatened the character of the city. Torres referenced the Dudley Street Neighborhood Initiative from Boston, Massachusetts, as another example of a community embracing inclusion and improving from within.

Swenson also argued that in order to achieve widespread inclusion, the political conversation has to change. “There is a fundamental human capacity to see beyond oneself and express love and forgiveness,” she said. “We see this happen in our personal lives – it needs to extend to our political lives too.”

Daniel Bluestone, Professor of the History of Art & Architecture and Director of the Preservation Studies program at BU, raised an important question during an audience Q & A session, asking how the panelists’ visions for inclusivity can be applied to cities. He referenced Sorting Out the New South City which suggests that physical diversity, in which people of different races and economic backgrounds live in close proximity, leads to inclusion because it forces people to confront human differences on a daily basis. When diversity is impossible to avoid, inclusion becomes inevitable.

The panelists responded by arguing that desegregation ought not be confused with inclusion. In fact, Margo notes, African-American wealth was actually higher during periods of segregation; diversity does not always equate to equal opportunity. Diversity is important, the panelists agreed, but inclusion requires more than simply forcing people with different backgrounds to live in close proximity. Inclusion must involve coexistence between people who accept and embrace their differences. Inclusion creates opportunities for everyone to succeed.

Finally, Copeland recalled the work of Jane Addams, who saw an inextricable link between democracy and inclusion. She argued that one cannot share the art of governance with others without having a relationship with them. City leaders must be able to build those relationships and make governance an inclusive and participatory process.

The panelists closed the discussion by surfacing important unanswered questions, highlighting the need for continued research and debate: Is there a single approach for cities to address all of the aforementioned barriers to inclusivity? Can city leaders do anything now to make their communities more open, or does this vision require a series of incremental steps over time?

Achieving inclusivity is one of greatest challenges for urban leaders. Whether cities can become centers of opportunity and equity remains a key question for the Initiative on Cities, academics, and practitioners the world over.