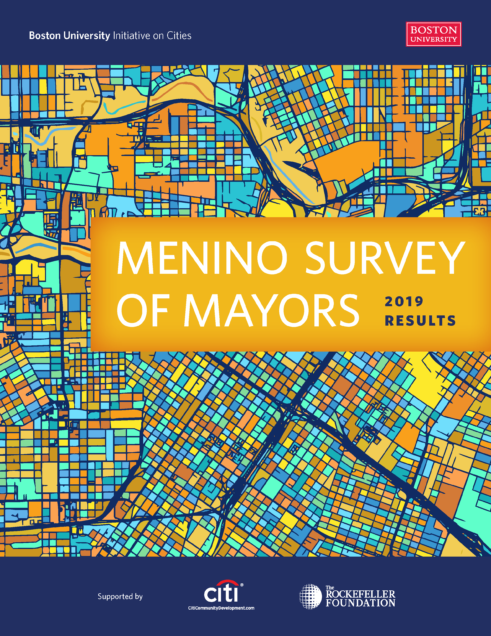 According to Boston University Initiative on Cities’ 2019 Menino Survey of Mayors – the only national representative survey of American mayors – city executives believe our nation’s crumbling infrastructure is the most important issue presidential candidates should be talking about on the campaign trail. In an open-ended question, 45 percent of mayors said infrastructure was the issue related to cities they hoped was discussed during the election, a response with so much consensus that the next top answer was housing affordability with only 15 percent.

Perhaps signaling growing concerns about the impacts of climate change on their cities, 25 percent of mayors cited water, wastewater, and stormwater projects, more than any other type of infrastructure project, when asked what type of “large” infrastructure project they would prioritize if they were given an unrestricted grant. This is a 40 percent increase since the question was last asked in 2015.

“Mayors are absolutely right that few issues matter more for our country’s future than investing in essential infrastructure – whether it’s roads and bridges, housing, mass transit, water systems, or any of the other structures that are too often taken for granted,” said Edward Skyler, Executive Vice President, Global Public Affairs at Citi and former Deputy Mayor of New York City.  “Neglecting the infrastructure needs of our growing cities can deepen inequality. Our bank works with mayors across the country to invest in key projects that help our cities grow in more equitable ways.”

Many important types of infrastructure projects are related to transportation, specifically roads and mass transit, as well as bicycle and pedestrian friendliness. Overall, over three quarters of mayors believe their cities are “too oriented towards cars,” with over a third “strongly” agreeing with that statement. Likewise, nearly half of all mayors believe travel for bicyclists, persons with disabilities, and pedestrians is not safe in their cities, while fewer than 10% believe the same for car drivers and mass transit riders. Nearly three quarters of mayors believe cities should make their roads more accessible to bicycles even if it means sacrificing driving lanes or parking, with just under a third “strongly” agreeing with that statement.

While mayors are clearly concerned about the safety of vulnerable road users, their preferred policies are not always consistent with transportation safety best practices in speed limits, parking, and cycling.  Large majorities of mayors believe that their speed limits are set at the right levels and enforced adequately. Similarly substantial proportions express favorable views of their cities’ current parking levels and pricing. Over three-quarters of mayors endorse painted bicycle lanes as safe alternatives to physically separated lanes—contrary to statistical analyses of bicycle accident data.

Mayors worry about cars contributing to climate change. Two-thirds of mayors believe vehicles are the biggest source of greenhouse gas emissions from their city, and the same percentage believe it’s important to improve their city’s electric vehicle infrastructure, even if it means less parking for non-electric vehicles. But mayors disagree along party lines on whether cities should play a strong role in reducing the effects of climate change, even if it means sacrificing revenues and/or expending financial resources. While 92 percent of Democrats believe this (55 percent “strongly”), only one quarter of Republicans do. Overall, 70 percent of mayors agree.

“This Survey provides unrivaled insight into the priorities and thinking of America’s urban leaders—especially at a time when they have been given responsibility for an extraordinary range of pressing problems,” said Graham Wilson, Professor and Director of the Boston University Initiative on Cities.

The survey also asked mayors about their attitudes and expectations for opportunity zones in their cities, which were created by the 2017 Tax Cuts and Jobs Act to give tax benefits to those who invest in designated areas of need. Nearly three-quarters of America’s mayors are happy with the opportunity zones selected in their cities, despite criticism by some that the program will ultimately benefit wealthy developers over communities in need. Six in 10 mayors believe the program will have a large and positive impact on their city’s economy, while less than a quarter say it will lead to gentrification and residential displacement.

“As mayors, we understand the importance of using every tool available to make our cities more vibrant, livable, and sustainable places. The Opportunity Zones program is one tool that promises us a chance to direct untapped sources of capital towards the places that need it most,” said Mayor Greg Fischer. “As we work together on our shared mayoral priorities, I want to thank my peers for recognizing Louisville’s work. As Vice President of the U.S. Conference of Mayors, I welcome our continued collaboration to build a more equitable country together. I’d also like to thank Boston University for their partnership and hard work to conduct these interviews of 119 mayors with academic rigor. The Menino Survey will undoubtedly help to inform mayors’ work as we move forward in 2020.”

The 2019 Menino Survey of Mayors was released today by the Boston University Initiative on Cities at an event at the National League of Cities’ City-County Leadership Center in Washington, DC. The survey, named after the late Mayor of Boston Thomas Menino and supported by Citi Community Development and The Rockefeller Foundation, is an annual project to understand the most pressing needs and policy priorities of America’s mayors from large and mid-size (over 75,000 residents) cities. In total, 119 mayors from 38 states were interviewed throughout the summer of 2019, providing a representative sample of mayors and cities nationally.

“We have a long history of working to advance economic stability and mobility in U.S. cities, and Boston University has been a great partner in providing the qualitative and quantitative data needed to help The Rockefeller Foundation and other investors more effectively focus our resources on people and communities in urban centers across the United States,” said Otis Rolley, Acting Senior Vice President of U.S. Equity & Economic Opportunity at The Rockefeller Foundation.

Key Findings of the 2019 Menino Survey of Mayors

January 21, 2020 – Fast Company: U.S. mayors like the idea of being less car-focused but hate the policies that could make it happen

January 24, 2020 – Greater Greater Washington: National links: More bikes and affordable housing are a part of a bold proposal for Paris

February 20, 2020 –Milwaukee Independent: Building a Fat City: How the Sprawl of Urban Planning Contributes to the Obesity Epidemic

April 3, 2020 – The Ledger (Op-Ed): Whether from crashes or the coronavirus, don’t just accept deaths

Telling the Untold History of Civil Rights Leaders in Boston

Getting to Yes on Housing in Greater Boston and Framingham

Downtown After COVID: Will Urban Centers be the Same?