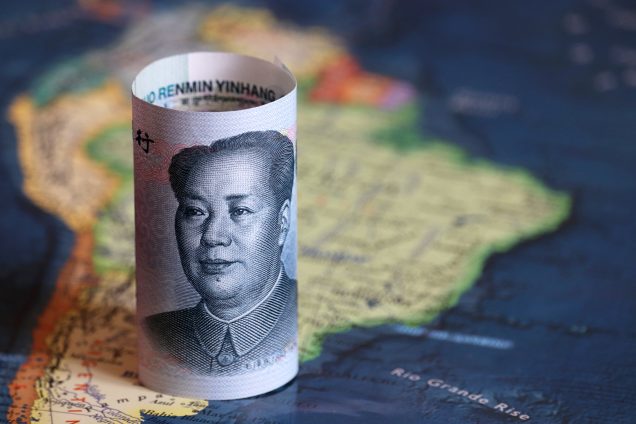 In a recent presentation as part of the Fall 2020 Global China Research Colloquium, Professor Barbara Stallings asked how do Latin American relations with China differ from relations with the United States.

Based on research from her latest book, Dependency in the Twenty-First Century? The Political Economy of China-Latin America Relations, Professor Stallings finds some answers through the lens of dependency theory.

Popular in the 1960s, dependency theory sought to explain the lack of development in Latin America. Two versions emerged: one which argued that external actors prevented and/or hindered development in the region, and one that highlighted countries’ reliance on capital and technology from abroad. A suggestion from this latter version was that countries in Latin America needed to start building their industries at home in order to modernize and develop, thus leading to decades of what would be known as the import substitution industrialization (ISI) strategy in the region—an economic policy that favors self-reliance and seeks to protect domestic industries via subsidies and a variety of trade barriers to foreign goods.

However, as dependency theory began to travel to other parts of the world, it became “too fuzzy” to disentangle how dependency was linked to development—or the lack thereof, as highlighted by Professor Stallings during her talk. She suggests using three causal mechanisms to better understand this relationship: market relations (i.e. trade, investment, finance), leverage (the use of power—economic and/or political—to influence outcomes), and linkages (sets of relationships that are used to advance the dominant country’s interests in the dominated one). None of these are mutually exclusive.

So, how do these mechanisms apply in the United States-Latin America relations? Traditionally, the United States has used all three to establish its dominance in Latin America post-World War II. Economic leverage was a particularly important example after the debt crisis of the 1980s in the region, which highlighted the economic mismanagement and failures in many Latin American countries, leading many to adopt the Washington Consensus, or neoliberal, model.

As Latin America continued opening up to international markets and influence, the use of this framework to understand dependency in the region has been insightful, as it brings into light what kind of influence a country may have on another one. Yet, dependency has also shifted in its traditional characteristics, as seen in China-Latin America relations.

China has not used political leverage in its relationships with Latin America—at least not in most of its bilateral exchanges in the region, according to Professor Stallings. Instead, the country has mainly used economic leverage to get access to raw materials, markets for its products, and—to some extent—to lobby the “One China Policy.” This economic leverage has been prevalent during the China boom period (2003-2013) in the region, when trade with China stimulated growth in Latin America and was reinforced with increased finance.

At its peak, trade with China reached $268 billion at the end of 2013, which was 22 times the amount of trade in 2000. Yet, this was only 13 percent of Latin America’s total trade. Trade with the United States and other partners, such as the European Union, continued to dominate. Moreover, China was the main trade partner with only four countries: Brazil, Chile, Peru, and Uruguay; and imports from China—mostly industrial goods—into the region have predominated over Latin American exports—natural resources and commodities—to China. This created a trade deficit that reached over $300 billion in 2018.

To Latin American countries, these trends reflect a dependency on China. In spite of the growth that some countries experienced from trading with China, these benefits have not offset the concerns of “going back to the twentieth century—or even earlier,” according to Professor Stallings. The reliance on natural resources and increasing exposure to greater price volatility and economic cycles has demanded the need for changes in the China-Latin America relationship, especially in the post-boom or recession period (2014-2019).

But is China open to expanding relations? Investment and finance exchanges have typically reinforced trade relations between China and many Latin American countries. In 2014, Chinese foreign direct investment (FDI) into the region reached approximately $20 billion, representing 20 percent of total FDI. Although Chinese FDI has experienced some diversification, from mostly focusing on energy to other sectors, such as agriculture and finance, Chinese investment growth has continued slowing down. In addition, volatility, concentration on a few industries, as well as weak environmental and labor standards and enforcement, have raised key questions about how much economic leverage China has been able to exert in some Latin American countries.

Similar questions are also present in regard to Chinese loans. Most of China’s lending in Latin America has been to countries typically considered political allies that also cannot access private capital (i.e. Venezuela, Ecuador, Bolivia and Nicaragua). Moreover, these loans have also been concentrated on natural resource and infrastructure projects, indicating a limited sectoral diversity of the lending portfolio and an emphasis on projects with greater environmental footprints.

What do these trends of Chinese trade, investment, and finance in Latin America mean in terms of dependency? Professor Stallings remarked there are two group of countries in Latin America when interacting with China: those that are willing to make deals behind closed doors (“Venezuela model”) and those that insist in more transparent exchanges and negotiations (“Chile model”). Thus, according to the three dependency mechanisms framework, the use of leverage has been important in the first group of countries, whereas markets and linkages have predominated in the second group, with further expansion of China’s linkages in the region especially since 2014 as views regarding China grew more negative.

Indeed, instead of responding with economic threats and leverage as the United States has in previous decades, China has increased its financial investment, as well as the number of diplomatic visits by Chinese leaders to the region. China also published a second white paper on the expansion of China-Latin America ties, and established institutions that can promote the relationship at a regional level (i.e. the China-CELAC Forum).

The announcement of the Belt and Road Initiative (BRI) and the invitation to Latin American countries to participate suggests that, perhaps, development is one area through which China may increase its leverage and linkages in the region. As of 2020, 19 Latin American countries have signed memorandums of understanding with China to be part of BRI. Interestingly, some of the region’s most important economies—Brazil and Mexico, for instance—have opted to not participate. This again highlights what the extent of China’s influence is in Latin America. As indicated during the talk by Professor Stallings and as shown in a diverse set of reports by the Global Development Policy Center, relations with China vary throughout the region.

Of course, the other question to ask is whether China wants to play a more important role in Latin America. Professor Stallings highlights that Chinese leaders have expressed the desire to establish a “new relationship,” but it remains to be seen what that may entail.

Although the use of dependency theory to understand development in Latin America has waned over time, Professor Stallings’ research indicates that, perhaps, it is still helpful—particularly in examining China’s influence in Latin America in the last two decades.