Tagged: Women Up! for a New Progressive Agenda

On March 3 and 4, 2014, the Center for the Study of Europe, in collaboration with BU’s Women, Gender and Sexuality Studies Program, hosted the 5th Transatlantic Dialogue on Gender Issues: Woman Up! for a New Progressive Agenda. The goal of the two-day event, sponsored by the Foundation for European Progressive Studies (FEPS) and the Fondation Jean Jaurès, was to explore theoretical, strategic and policy challenges concerning gender equality facing progressives on both sides of the Atlantic and to consider ways to strengthen progressives’ positions in future elections. Participants included, Zita Gurmai, MEP for the Hungarian Socialist Party and President of the Party of European Socialists;  Pia Locatelli, Italian politician and MEP for the Italian Democratic Socialists; Gina Sapirio, Dean of the College of Arts & Sciences at Boston University; and Ghislaine Toutain, Consultant with the Fondation Jean Jaurès among several others. For a full list of participants, please view the event announcement and schedule here. 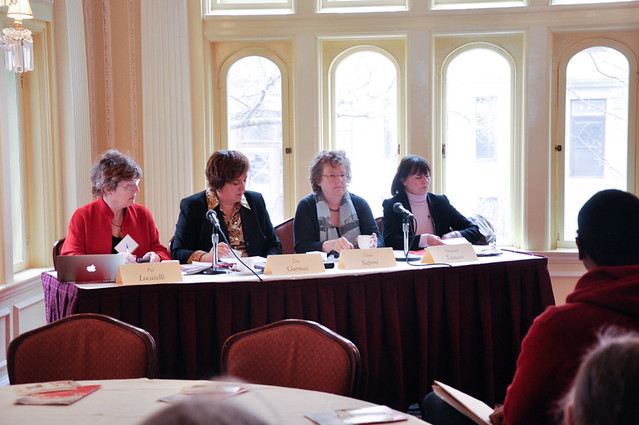 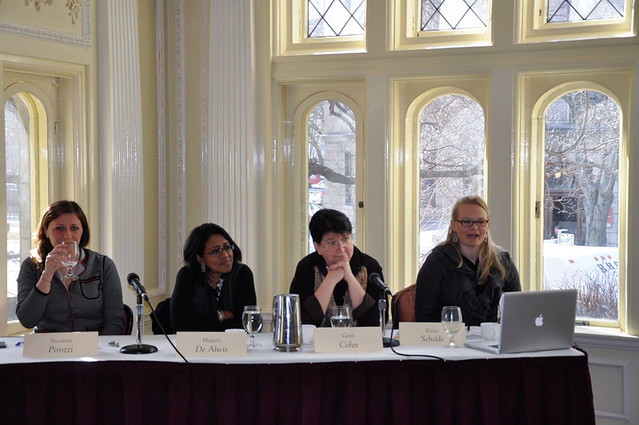 Listen to the workshop sessions on Sound Cloud*:

*We regret that due to technical difficulties, we were not able to record introductory remarks by Zita Gurmai, Pia Locatelli, and Ghislaine Toutain, the first session on “The (In)visibility of Left feminism,” or Victoria Budson’s remarks in the second session on “Changing the Narrative on Gender Issues.”

Woman up! for a new progressive agenda
Fifth Transatlantic dialogue on gender issues

March 2014 marks the fifth edition of the transatlantic dialogue on gender issues, organized by the Foundation for European Progressive Studies (FEPS) and the Fondation Jean Jaurès, and hosted by the Center for the Study of Europe at Boston University in collaboration with the Women's, Gender & Sexuality Studies Program at Boston University. The two-day event will kick off Women's History Month, the 2014 theme of which—Celebrating Women of Character, Courage and Commitment—serves as an inspiration to link past achievements with present and future aspirations.

The current political momentum both in Europe and the USA, combined with this exciting anniversary, present a unique occasion within the cycle of the transatlantic dialogue. This is expressed symbolically through the fact that the venue of the dialogue is again Boston University, where the research program was launched five years ago.

Topics to be addressed are crucial in the short-term given upcoming elections in Europe and the US. However, participants in the conference, by synthesizing the experiences from past meetings, will also be looking at theoretical, strategic and policy challenges concerning gender equality that progressives will face over the long-term on both sides of the Atlantic. The dialogue is planned to be an inspiration for both American and European participants: collecting initiatives and setting up strategies to strengthen progressives’ positions in future elections.

The workshop is open to anyone with an academic interest in women's issues. Seating is limited and advance registration is requested. [Register]

Chair: Vivien Schmidt, Director, Center for the Study of Europe

How have progressive political forces have become from norms setters to reactive followers concerning gender equality? How can the progressives address structural inequalities and increase women’s visibility to enlarge their societal basis through parity?

13:30-15:30 | Changing the Narrative on Gender Issues: From Struggle to Emancipation

Against the crisis, how can we develop a positive story of emancipation?

9:00-11:00 | Strengthened Commitment to the International Dimension: Gender, Peace, and Security

How can progressives advocate for a gender sensitive peace promotion as part of the global governance? How can progressives promote effective implementation of UNSCR 1325 and related Resolutions within regional organizations and through national action plans?

13:30-15:30 | Sharing Effective Strategies: Mobilizing Women for the Progressive Cause

How can we combine traditional means of communication with new technologies in order to mobilise more women for the progressive cause? 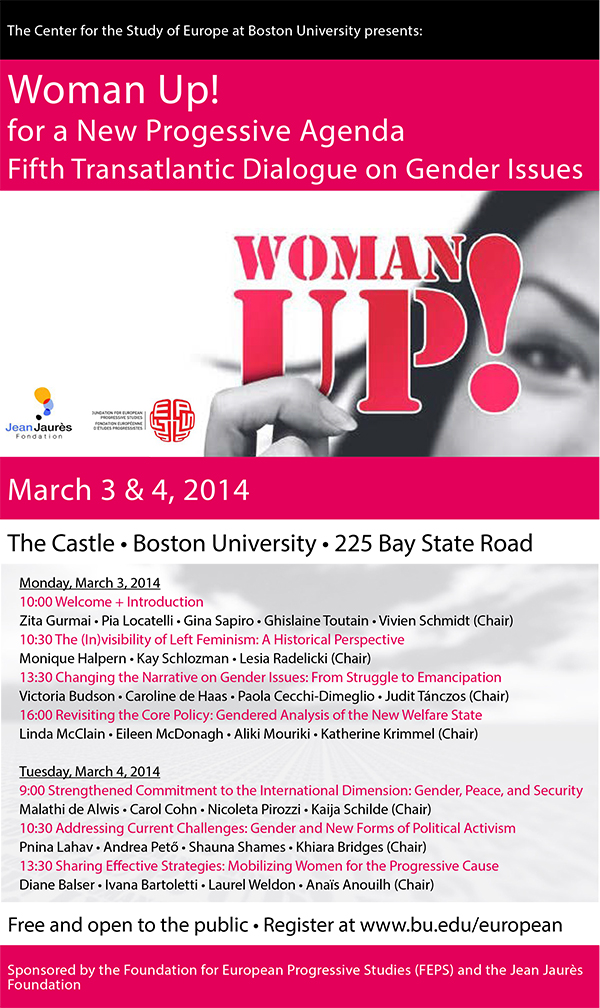 Tagged Women Up! for a New Progressive Agenda