The Center for the Study of Europe at Boston University provides institutional support for European studies across Boston University. We bring together faculty, students, international visitors, and others with interests in Europe across a variety of disciplines and coordinates the European Studies BA and minor. We also sponsor talks by leading scholars in the humanities and social sciences on political, economic, and social challenges facing Europe, as well as on European art, literature, and music.

The Center for the Study of Europe was established in 2011 and became part of the Frederick S. Pardee School of Global Studies in 2014. It was preceded by the Institute for Human Sciences (2002-2010), which promoted research and discussion of public policy issues among European and American intellectuals and policymakers.

The Center is a member of the European Consortium for Political Research (ECPR) and the Council for European Studies. All Boston University faculty involved in the study of Europe through research or teaching, regardless of the school or college in which their appointments are based, are welcome to affiliate. 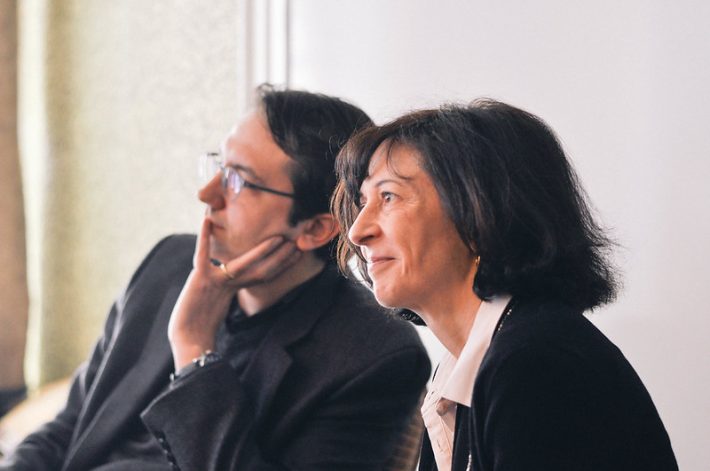 Daniela Caruso: Professor of Law and Jean Monnet Chair; Director, Center for the Study of Europe (January 2020-present) with Vlad Perju, Director of the Clough Center for the Study of Constitutional Democracy at Boston College. “Eastern European Democracies and the EU Rule of Law Framework (Europe and Law Series),” March 17, 2016.

The mission of the Center for the Study of Europe is to promote a deeper understanding of Europe through its cultural heritage; its political, economic, legal, and religious histories; its art, literature, music, and philosophy; as well as through its emergence as a new kind of supranational entity, the European Union. Operationally, the Center provides a focal point and institutional support for the study of Europe across Boston University through coordination of teaching missions, support of research, community-building among faculty and students, and outreach beyond the University.

Each year the Center offers a rich program of activities ranging from public lectures and panel discussions, international symposia and conferences, film screenings and concerts, to seminars, round-tables, and lunch talks. Participants have included well-known academic researchers, politicians, policy experts, and journalists as well as artists, poets, activists, and public intellectuals. We work closely with other centers, departments, and schools here at BU; with local universities and cultural organizations; with European Consulates and Embassies; and with publishers of literature in translation, among others.

The European Studies program offers a 10-course major and a 6-course minor, both of which draw on the resources of the Pardee School of Global Studies, the College of Arts & Sciences, BU Study Abroad programs in Europe, as well as on BU’s other schools and colleges. The program combines a unifying regional focus with a multidisciplinary approach, enabling students to bring together courses that develop language skills; social, historical, and cultural knowledge; and political, economic, and international relations expertise. Both the major and the minor require written and spoken knowledge of a European language other than English.