On Tuesday, April 18th, Irish poet Harry Clifton was the guest speaker at the Center for the Study of Europe, reading from his collection of poems, Secular Eden: Paris Notebooks 1994-2004. Clifton started the conversation by briefly describing different types of Irish poets and the complex emotions arising from the placement of Ireland within the broader interpretation of what it means to ‘be European’. Joking he said, “as an Irish poet you are caught – as they say in the economic debate – between Boston or Berlin, and you are asked to choose ‘are you on the Berlin side or are you on the Boston side?” 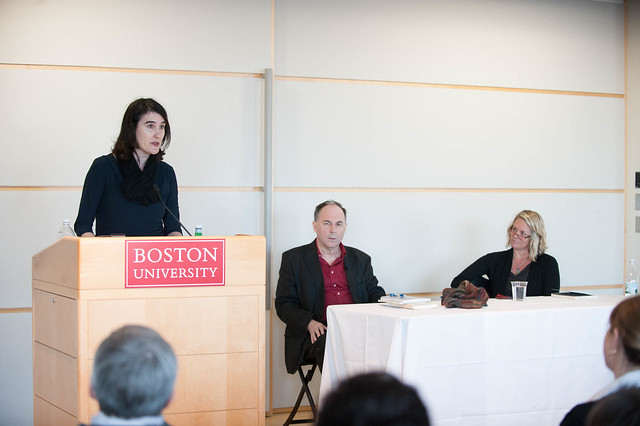 Clifton then gave the background of his poem “Euclid Avenue,” which was written 30 years ago while Clifton was a visiting fellow at the Iowa International Writers Conference. While the poem is a reflection upon his university days, Clifton explained his childhood experience, “growing up in Ireland in the 1950s and ‘60s, you were part of a post-independence Ireland where the poetry was part of what you might call the ‘pedagogy’ – it was coming from above down and it was lots of early Yates, lots of folk identity – very beautiful poetry but if, as in my case, you grew up in a city and you had other roots, cosmopolitan roots, you found that you had to go looking for a voice somewhere else.” He then delved into describing his exposure to two things during university which profoundly influenced his writing: European philosophy and modern American poetry. After discovering the fantastic spectrum of 20th century American poetry, Clifton explained his fascination with Hart Crane’s work, including the intriguing fragment of a poem. Introducing his poem, “Euclid Avenue,” Clifton commented that the “words ‘Euclid Avenue’ were like a poem in themselves,” and continued by admitting, while a common name in suburban America, the ‘Euclid Avenue’ had an “energy…like a coiled spring” and that there was something “quite American, and different” about the words. Clifton added “I often feel –when I’m in America – that I’m in a society that’s in perpetual movement, and that I’m always in the presence of an undertone of automotive power. I can hear a sort of ground base of American life in the background all the time and it’s an energy that’s going outwards, whereas Irish energy is often going inwards – it’s an introverted sort of super-historical energy.”

The poet then talked about transitions, and his experience moving from Ireland to the continent at the end of the 1980s, a time when Europe had “come to be considered a museum – a very beautiful place, but somehow frozen.” Clifton continued, “the ice broke in 1989 and the old energies that had been buried emerged from the permafrost of all the Cold War years,” something he identified as a crucial juncture in the re-establishment of Europe. He complimented Europe in its “capacity for dying and resurrecting itself,” and commented on the immortal energies that thrive in Europe. He then read several poems related to his experience in the Apennine Mountains in Italy.

Clifton paused in his readings to discuss his fascination with the mixture of light and darkness in the energy of Europe, stating “I often think of Europe as the conscious of the world, because it has lived through things that other parts of the world might yet live through but haven’t lived through,” emphasizing how his interpretation of ‘conscious’ encompassed both its positive and negative connotations, viewing the idea as an “incubator of things that often come to terrible fruition in other places, as well as in Europe itself.” He then moved on to described the timelessness of Europe in his reading of “The Landbridge” about the pilgrimage route from Paris to Rome, followed by a discussion of the climate and natural environment in Europe before reading “Citrus” and “Daffodils”.

Clifton then explained the relationship between poets and their audience as an “active friendship,” and then opened the floor to a conversation with the audience. After several minutes of Q&A, Clifton transition back into reading from his collection of poems, focusing on those related to Ireland, including a description of a traditional dark humored Irish joke. Clifton read from his poem “Burial With Your People,” which describes a fluid landscape, “half night, half day; half water, half sky – you would not know exactly what side of existence you’re on” and tied the piece back to the “great statement of the melancholic nature of the Irish mind in its approach to things that are life giving, life affirming.”

After a second period of conversation with the audience, Clifton ended by highlighting his personal favorite Irish poetry: the elementary writing of hermits who wrote about the delicacies of nature and raw untouched island. He finished by reading “After Ireland,” his own interpretation of Ireland before the modern era, a piece which, Clifton explained, was his attempt to capture the tone of the early Irish poets he was inspired to emulate.

You can watch the entire conversation here:

This year’s European Voices events are organized in collaboration with the literary journal AGNI and the Goethe-Institut Boston and are taking place as part of EU Futures, a series of conversations exploring the emerging future in Europe. The EU Futures project is supported by a Getting to Know Europe Grant from the European Commission Delegation in Washington, DC to the Center for the Study of Europe at Boston University.